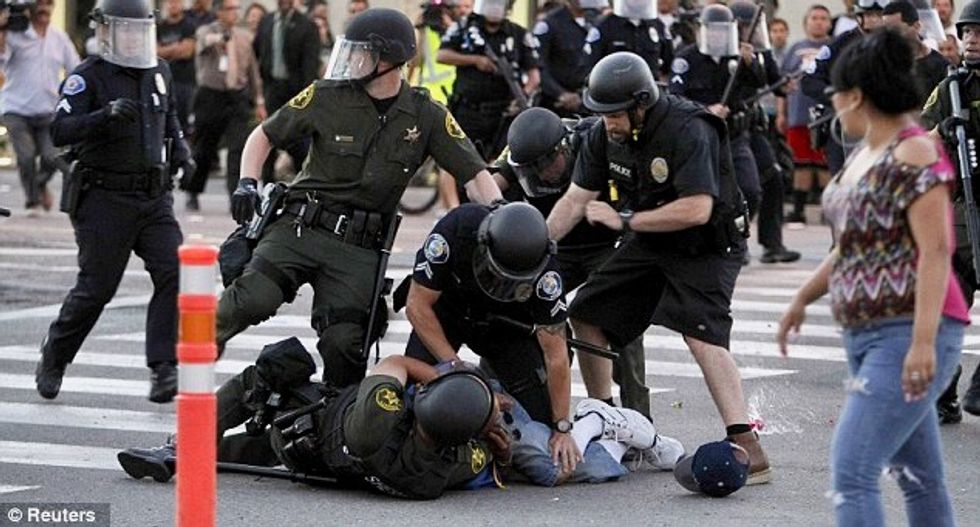 Two dozen people were arrested in Anaheim, California, during a protest calling for the arrest of an off-duty Los Angeles police officer who fired a gun during a scuffle with a teenager outside of his Anaheim home, police said on Thursday.

Nobody was wounded in the shooting incident, which occurred on Tuesday, local media reported.

Some of the 300 protesters threw rocks at police officers in riot gear, kicked squad cars and blocked intersections as they marched and chanted "hands up, don’t shoot" and "whose streets, our streets" on Wednesday night, the Los Angeles Times reported.

Some 24 people were arrested and face misdemeanor charges including failure to disperse, the Anaheim Police Department said on social media early on Thursday.

The incident that ignited the protest was captured on a cell phone video that appeared to show a man holding a teenager's collar as they scuffled with each other in front of a house in a residential neighborhood.

The video, which was circulated on social media and local news, then showed a teenager tackling the man into a line of shrubs and then another teenager punching him.

As several young people began surrounding the man, who still had a hold of the teenager's collar, he pulled a gun out of his waistband and fired it once, the footage showed.

A 13-year-old and 15-year-old were arrested after the incident, the Los Angeles Times reported.

The identities of the teenagers who were arrested and the officer have not been made public. The incident comes amid a national debate over the role of law enforcement officers and their use of sometimes deadly force against minorities.

The Los Angeles Police Department has placed the officer on administrative leave as it investigates the incident and reviews the video, the department said in a statement.

The confrontation began with "ongoing issues" involving a group of juveniles walking on the lawn of a Los Angeles Police Department officer's home in Anaheim, police told the Times.

"The videos posted online do not depict the entire event," the Anaheim Police Department said on Facebook.

(Reporting by Brendan O'Brien in Milwaukee; Editing by Gareth Jones)