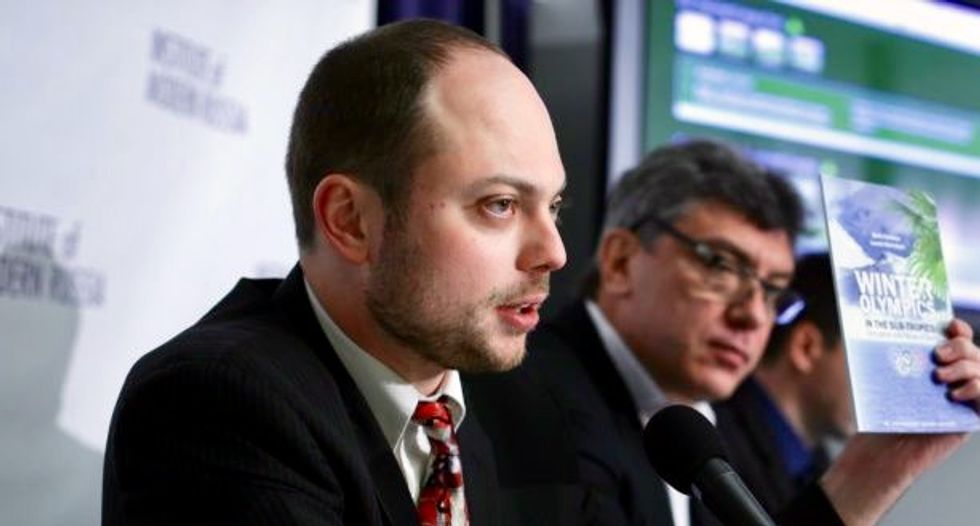 A Russian opposition politician in a coma with organ failure suffered "acute poisoning" by an unknown substance, his wife said Tuesday, two years after a suspected poisoning nearly killed him.

Kremlic critic Vladimir Kara-Murza has been on a ventilator and undergoing renal dialysis since he was hospitalised after collapsing in Moscow on Thursday.

"His condition is critical but stable," his wife Yevgeniya Kara-Murza told AFP.

"The official diagnosis is acute poisoning by an unidentified substance," she said.

There has so far been no confirmation of foul play but the activist's wife said samples have been sent to laboratories in France and Israel to ascertain the origin of the poisoning after tests in Russia revealed "nothing".

The 35-year-old Kara-Murza was hospitalised in 2015 and diagnosed with acute kidney failure in connection with poisoning and tests found high levels of heavy metals in his blood.

He asked Russia's Investigative Committee to probe whether he had suffered intentional poisoning but no criminal case was opened.

Kara-Murza was an ally of the late opposition politician Boris Nemtsov, who was shot dead close to the Kremlin in 2015.

He now works as a coordinator for the Open Russia foundation of Mikhail Khodorkovsky, a former oil tycoon who served a decade in jail after openly opposing President Vladimir Putin.

Kara-Murza's father last week told the Moskovsky Komsomolets daily that his son's latest collapse could be a result of the earlier incident.

"It's just that the poisoning two years ago didn't pass without a trace. My son's health is weakened," said Kara-Murza's father, who is also called Vladimir.

Kara-Murza's hospitalisation drew the attention of hawkish US senators who used it to warn new President Donald Trump against getting too cosy with Russian President Vladimir Putin.

In 2016 Chechen strongman and Kremlin loyalist Ramzan Kadyrov prompted outrage by posting a video on Instagram of Kara-Murza and Parnas party leader Kasyanov in the cross hairs of a sniper scope.