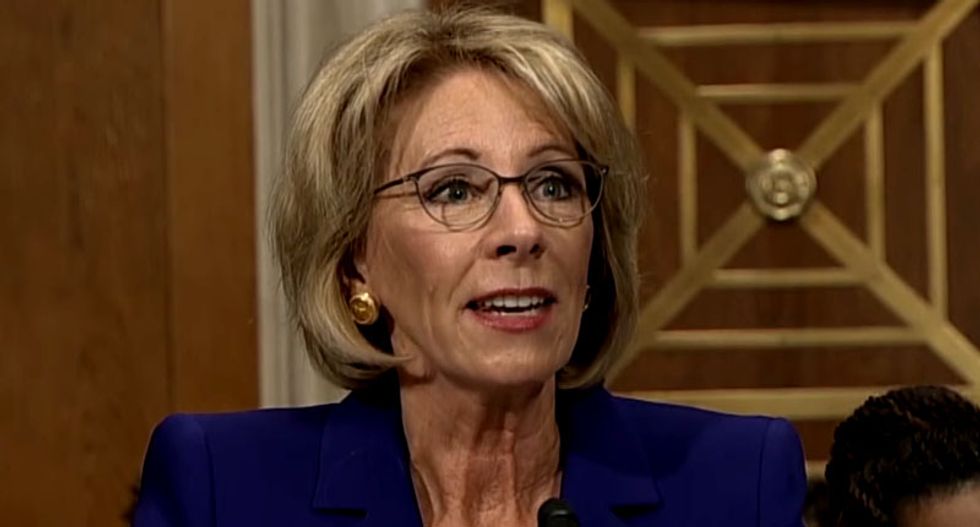 Board of Trustees of the San Diego Unified School District were expected to pass a resolution on Tuesday, Feb. 14 to extend an invitation to President Donald Trump's Secretary of Education, Betsy DeVos to visit the city's schools.

On Monday, Feb. 13, however, Board President Richard Barrera released a statement announcing that the visit would not be happening, after all. Noting that the board's intention was to help DeVos learn about what the public schools are doing well, Barrera wrote, "We also believed — and still believe — that her narrow ideologically driven view of our schools does not stand up to the facts. So, my intention was to challenge her views openly and in a public setting."

The plans for a resolution to invite DeVos were first released on Friday, Feb. 10. They revealed the board was expected to invite the new education secretary for a visit "on a fact-finding mission to learn what the school district is doing to create quality public schools in every neighborhood, so that she can collect the data needed that will allow her to base her decisions on what is best for students rather than on any political ideology."

Barrera's statement noted, "Given the polarizing nature of the DeVos nomination and confirmation vote, however, it is clear this would be the wrong time to engage the Secretary in dialogue. Now is the time for those of us who believe in public education to stand together and confront the threat clearly posed by the DeVos ideology." Barrera added he would withdraw his co-sponsorship of the resolution, effectively killing the measure.

Read the full statement in full below.

During an attempted school visit to the Jefferson Academy in Washington, D.C. last Friday, DeVos was met by a small group of protesters who blocked her from entering the school. The protestors held signs that read "Black Lives Matter" and yelled "Shame!" while also blocking her car as she attempted to leave the school. "Giving money to senators and buying your way into the position, you should be so proud of yourself," said one of the protestors.

DeVos' ideology would leave public schools behind, as the Trump administration prefers a policy of "school choice," which would favor charter and private schools, leaving scarce funding for the public education system. It is an especially alarming policy in the most rural parts of the country, where there is little choice for families in terms of access to schools.

Barrera's statement opposing DeVos's visit to the San Diego Unified School District sends a message, though. "Our intention was not to exclude anyone from the process, and so I hope we can now move forward together to create a genuine conversation about the future of our schools with the public we serve."