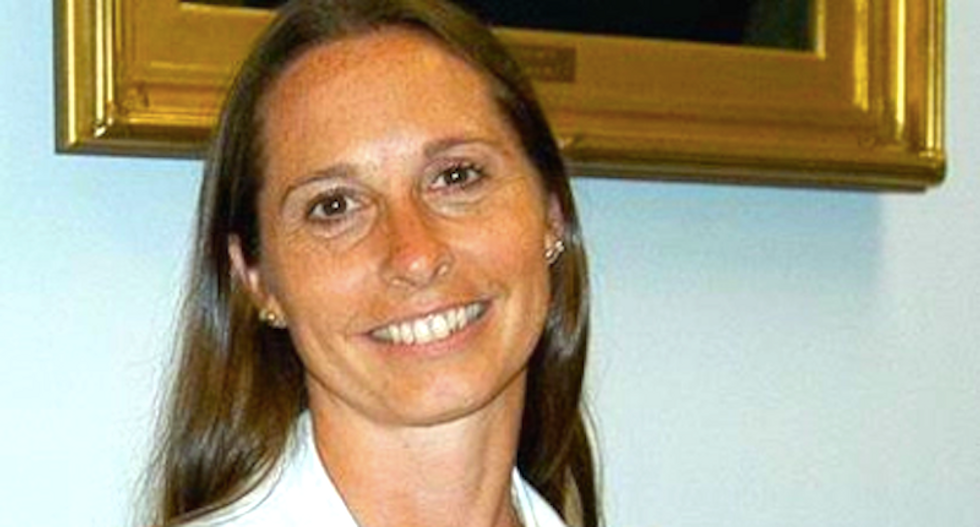 The stepdaughter of a teacher killed at Sandy Hook Elementary was interrupted by laughter as she gave emotional testimony at a New Hampshire hearing on a bill to loosen firearms licensing.

Amy Lawton, a middle school English teacher in Grafton County, abruptly stopped her testimony when she heard snickering -- and she scolded whoever was laughing at her, reported the Concord Monitor.

Others in the legislative hearing Wednesday heard at least one person laugh, and another person shushed them.

"It was very obvious," Lawton told NH1. "Afterwards, one man did come up to me, and I was sitting in the aisle, and he kind of crouched down and apologized. He said, 'I was one of the people who laughed, and when you said that it was rude, I realized how rude it actually was and I’m very sorry.'"

Susan Olsen, legislative director of the pro-run Women’s Defense League of New Hampshire, asked Lawton afterward if she was all right, but denies hearing any laughter.

“Maybe there was nervous laughter because of her circumstances,” Olsen said. “I think everybody there was listening carefully. I told her that there wasn’t anybody there that wouldn’t defend her right to say what she believed. It was pretty brave.”

Lawton said she hasn't sought out the limelight after her stepmother, Sandy Hook principal Dawn Hochsprung, was murdered, but she felt a personal connection to the legislation under consideration by New Hampshire lawmakers.

"It just feels like there’s so much silencing going on right now in many different ways, and I wanted to kind of go against that a little bit and make sure other voices are heard," Lawton said.

The state House voted 200-97 to end the requirement for concealed carry permits for gun owners to carry weapons in public, and Republican Gov. Chris Sununu has said he will sign a bill that's been vetoed twice by his predecessor.

Lawton said she was shocked and angered by the laughter during her testimony.

"Afterwards, I guess, I felt really sad that people were so entrenched in their own views that they couldn’t even listen to the other side, and it was kind of devastating actually. It was devastating," she said.