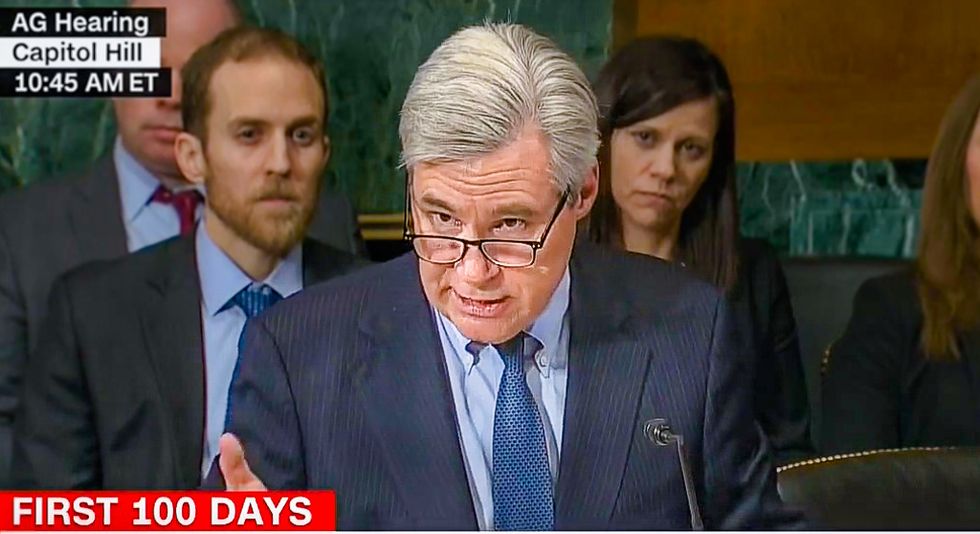 In a blistering statement, Whitehouse said that Sessions' actions during the 2016 campaign called into question whether the Alabama Republican could be an independent check on the Trump presidency.

"On the campaign trail, the American people witnessed Donald Trump mock a disabled reporter and make disparaging remarks about immigrants and minorities, all with no push back from Senator Sessions," Whitehouse noted. "We all witnessed chants of 'lock her up,' which Senator Sessions did not push back against and even excused in his hearing as, quote, humorously done."

"The problems did not end with the campaign," he continued. "President Trump and his family have brought more conflicts of interest to the White House than all other modern presidents and families combined. The proposed Trump domestic cabinet is an unprecedented swamp of conflicts of interest, failures of disclosure and divestment and dark money secrets. The Trump presidency is a haven for special interest influence and they're just getting started."

"In addition to being a substantive backfire, the order was a procedural botch," the senator said of the executive order. "The opening days of this administration have been a gong show, but a gong show with a nuclear button."

"Many Republican members of Congress have made a Faustian bargain with Donald Trump. They don't admire him as a man, don't trust him as an administrator, but they respect the grip he has on their voters," Whitehouse observed. "The Republican Fausts are in an untenable position. The deal they've struck with the devil comes at too high a price. It really will cost them their soul."

"Even if Trump's ideology were not noxious, his incompetence is a threat to all around him. To say that it is amateur hour at the White House is to slander amateurs."