Some nations affected by Trump's immigration order may stay on list 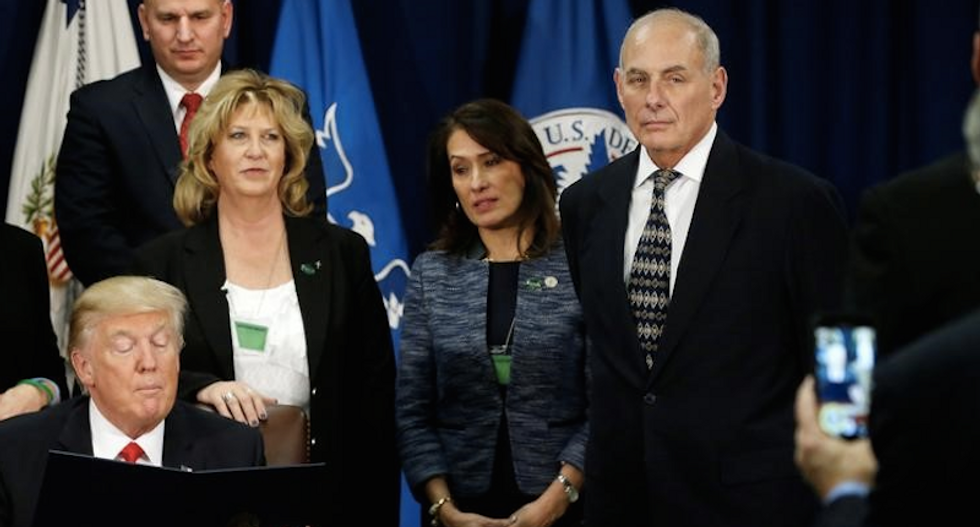 Nationals from seven Muslim-majority countries temporarily barred from the United States by President Donald Trump's executive order may be blocked indefinitely, and others might be added to the list, Homeland Security Secretary John Kelly said on Tuesday.

Under the order released on Friday, travelers from Iran, Iraq, Libya, Somalia, Sudan, Syria and Yemen may not enter the country for at least 90 days while Kelly and others determine whether there is enough information available to screen them.

Kelly said others may be added if it is determined they "could tighten up their procedures" to ensure more secure vetting.

Several lawsuits have been filed blocking portions of the order, which drew harsh criticism from some of Trump's fellow Republicans, Democrats, human rights organizations and some Western U.S. allies.

Vice President Mike Pence was closely questioned about the order by Republican senators during their weekly caucus lunch.

"Obviously what happened Friday, they have to understand, was not well done," Republican Senator Bob Corker told reporters. "... There are a lot of issues here that I don't think were well thought through."

Confusion mounted during the weekend as U.S. Customs and Border Protection, a division of the Department of Homeland Security, rushed to brief airlines and customs agents about how to implement Trump's order. The executive action was not explicit about how to handle a wide range of people trying to enter the United States, including permanent residents, students and even Iraqi pilots training to protect U.S. troops.

Kelly said he knew the order was coming and "had people involved in the general drafting of it."

But a Department of Homeland Security official, speaking on the condition of anonymity, said Customs and Border Protection officers had no advance notice of the order or how to respond.

Some issues were addressed on Tuesday.

Kelly said people from the seven targeted nations who hold dual citizenship would be allowed to enter the United States on the passport of a non-restricted nation, which had been uncertain.

The executive order also stopped the resettlement of refugees for 120 days. But the administration granted waivers to 872 "in transit" who will be arriving this week.

Kelly came to the U.S. Capitol later on Tuesday to brief congressional leaders and the heads of national security committees about the order. He was peppered with questions from both Republicans and Democrats concerned about the lack of planning.

Senator Claire McCaskill, the ranking Democrat on the Senate Homeland Security Committee, said Kelly made clear the White House is happy with the order, and that the administration had not wanted to wait to address details about its implementation.

"It was pretty clear that the president wanted this executive order put in place, and he wanted it implemented immediately. And it's not going anywhere," she told reporters.

Since the order, 721 travelers with visas from the seven countries were denied boarding U.S.-bound flights, according to McAleenan. The department has also processed 1,060 waivers for legal permanent residents, such as green card holders.

Kelly said immigration and customs officials were in compliance with court orders and no agent knowingly or intentionally violated them.

The Trump administration also sought to clarify on Tuesday that citizens of U.S. ally Israel who were born in Arab countries would be allowed into the United States. The U.S. Embassy in Tel Aviv said a valid U.S. visa in an Israeli passport would still be valid even if the passport holder was born in one of the seven countries.