Stephen Colbert hilariously grills Jake Tapper on Trump: 'Why are you so mean to him?' 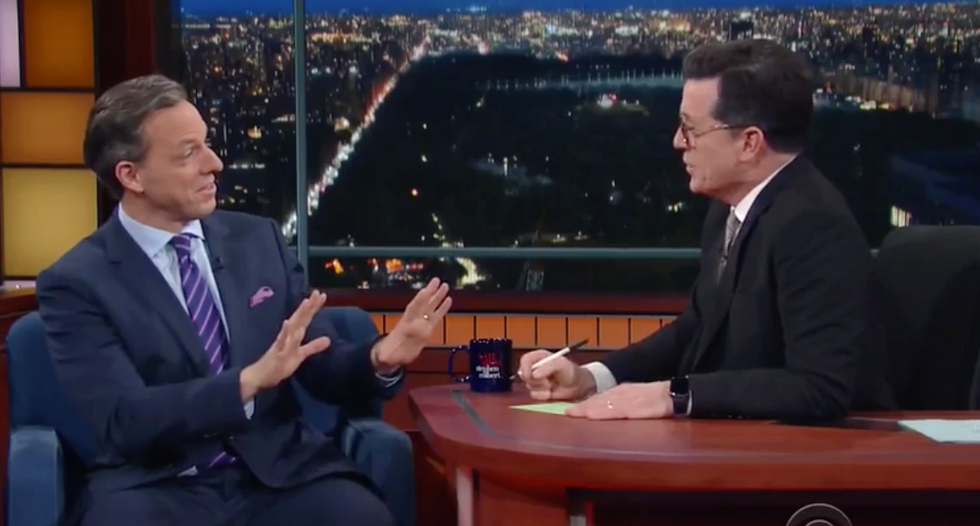 CNN’s Jake Tapper visited "The Late Show" on Thursday to discuss "fake news," Donald Trump and the time host Stephen Colbert made fun of him for drinking a Jack and Coke.

Tapper appeared onstage with a gift for the host — a Dartmouth T-shirt, in honor of Colbert’s Comedy Central alter ego, who fake-attended the university.

“I actually went to Dartmouth,” Tapper, who's speaking at the university's commencement this year, told "the Late Show" host.

On the topic of fake news, Colbert asked Tapper about Trump’s relentless attacks on his network, reminding his guest that the president has called CNN “fake news, fraud, the worst, so biased, failing, unwatchable, a disgrace to the broadcasting industry, disgusting, phony reporting, unprofessional, bad television and CNN can go to hell.”

“Why are you so mean to him, Jake?” Colbert asked, before asking how his CNN colleagues handle Trump’s rage.

The pair then reminisced over their first meeting (13 years ago, on the campaign trail during the 2004 presidential race) and Tapper’s pragmatic response the following year when Colbert told him he had inked a deal for Comedy Central’s “The Colbert Report.”

Colbert also referenced the CNN host’s contentious interview on Tuesday with Trump adviser Kellyanne Conway, asking Tapper what he thought about her demand for nicer coverage of the president.

“I think that our coverage follows his lead,” Tapper told Colbert. ”I think that if he pivoted, as he claimed he would, and was more presidential, if he didn’t send out nasty tweets about Nordstrom or judges … if he didn’t do that sort of thing -- then I would be delighted, frankly, to cover the polices more.”

“Please don’t go where I think you’re going with that,” Tapper joked.

Later, Tapper revealed the "Late Show” host once “shamed” him for drinking a Jack Daniels and Coke, which at the time was “what [he had] been drinking for 20 years.”

“He made fun of me for it, and I’ve never had one since!” Tapper said.

Watch the full interview below, via CBS: