Stolen 'Work will set you free' gate returned to Dachau 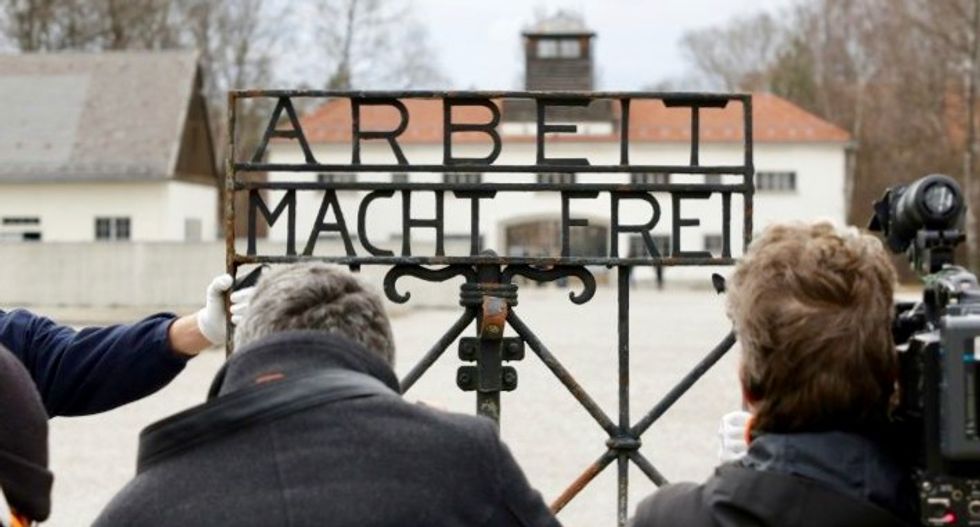 The gate, stolen from Dachau in 2014, was found in Norway following an anonymous tip-off

An iron gate with the infamous slogan "Arbeit macht frei" ("Work will set you free"), stolen from the former Nazi concentration camp of Dachau in Germany two years ago, was returned to the site Wednesday.

The theft of the 100-kilo (220-pound) gate was reported in November 2014, sparking uproar, with German Chancellor Angela Merkel calling the crime "appalling".

It was recovered outside Bergen in southwestern Norway last December following an anonymous tip-off.

At a ceremony marking the return of the gate, the president of the International Dachau Committee, Jean-Michel Thomas, urged investigators to press on with the probe into the theft.

He said he was "deeply shocked by the desecration of the site dedicated to the memory of all the victims of the camp".

He said the theft had aimed to "remove a trace, a symbol of all that is represented by the inscription 'Arbeit Macht Frei' on this gate of Dachau camp that some 210,000 detainees walked through from 1933 to 1945".

The gate was taken on a Saturday night between the rounds of security guards watching the site.

Police at the time said they were investigating whether neo-Nazis had committed the crime and offered a 10,000-euro ($11,000) reward for information that could solve the case.

No arrests have been made so far.

Gabriele Hammermann, who heads the Dachau concentration camp memorial, said the gate will now be placed in the museum rather than restored to its original position.

"We had almost lost all hope of finding the gate. We made a replica that now replaces the original gate," she said.

In the museum, "we will tell the story of the theft as well as the important history of this door, what 'Arbeit macht frei' meant for the prisoners who saw it every morning on their way to work and back."

The Dachau camp near Munich opened in 1933, less than two months after Adolf Hitler became chancellor.

Today some 800,000 visitors from around the world visit the camp each year.

Last Sunday, US Vice President Mike Pence paid a sombre visit to the camp along with his wife and daughter.

Another sign with the same inscription at the former Nazi death camp of Auschwitz was stolen in 2009.

The mastermind of that theft, Swedish neo-Nazi Anders Hoegstroem, was caught and jailed for two and a half years.

The metal sign was eventually recovered, cut up into three pieces. A replica was displayed above the entrance until the original was restored in 2011.