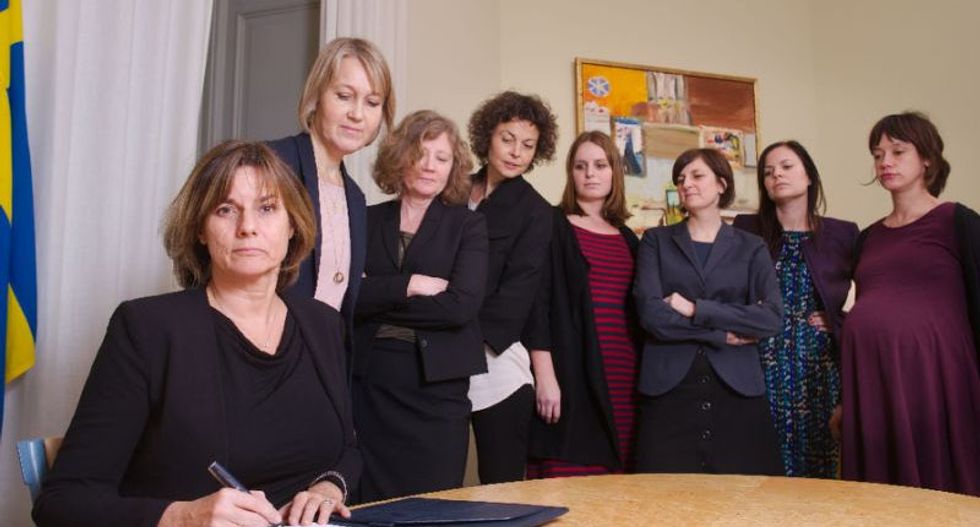 Sweden's deputy prime minister, Isabella Lovin, on Friday published a photograph of herself signing a climate bill surrounded by her closest female colleagues, mocking a photo of US President Donald Trump.

In the photo, Lovin, who also serves as environment and development aid minister, is seated at a desk as she signs the bill under the watchful eye of seven female colleagues, including one who is visibly pregnant.

The shot parodies a photo taken of Donald Trump on January 23 in the White House, as he signs a decree barring US federal funding for foreign NGOs that support abortion, as his all-male colleagues look on.

Sweden, a pioneer in women's rights, is known for its high level of women in the workplace, including in parliament and government.

"We are a feminist government, which shows in this photo. Ultimately it is up to the observer to interpret the photo," the Swedish minister wrote in a comment to AFP.

The climate bill she is signing in the photo aims to make Sweden carbon neutral by 2045 and "marks a new era in Swedish climate politics," Lovin wrote.

"There is a global demand for climate leadership. I want to show that Sweden is ready to take that leadership," she added.

The Trump photo elicited an avalanche of comments, many of them remarking that no woman was present for a decision concerning women.