'That would be devastating': Women worry about Trump threats against Planned Parenthood 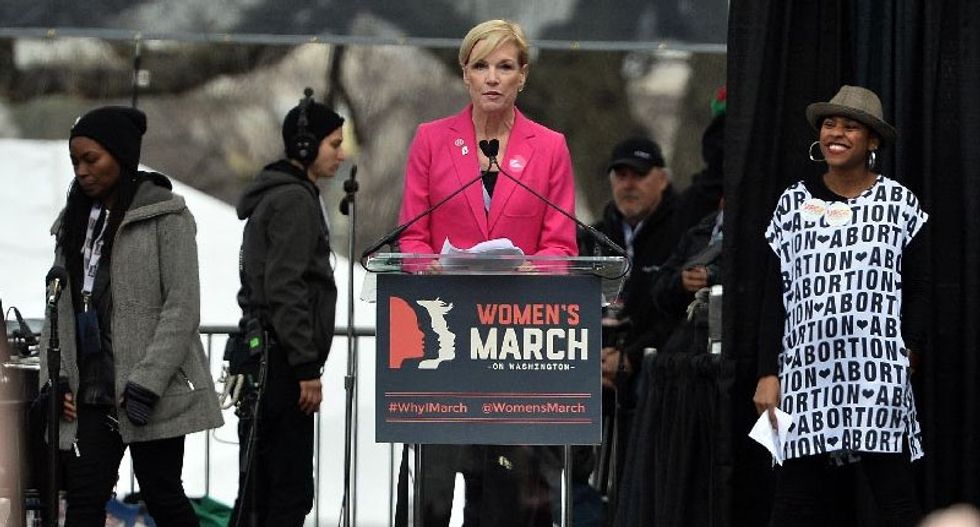 Planned Parenthood president, Cecile Richards, speaks during a protest on the National Mall in Washington, DC, for the Women's March (AFP Photo/Andrew CABALLERO-REYNOLDS)

When President Donald Trump took office last month heading one of the most vocally anti-abortion administrations in modern US history, it was clear that one of his first targets would be Planned Parenthood.

He has promised to end federal funding for the non-profit health care group with some 650 centers across the United States offering abortions and other health services -- a longtime goal of Republican politicians even though Planned Parenthood says only around three percent of the services it provides are abortion-related.

Shelby Weathers voices a common response to the threat.

"As a woman, I feel almost attacked," the 18-year-old student says at one of the group's centers in Phoenix, Arizona, where she has access to contraception.

"It's really discouraging to hear people are trying to take away access to health care."

In a clear sign of the administration's position, Vice President Mike Pence recently headlined an anti-abortion march in Washington, where he told the gathering that Trump's election in November proved that "life is winning in America."

Trump himself told the marchers in a tweet that they had his "full support."

Samaria has just undergone an abortion at the Phoenix clinic. A single mother of two who opposed abortions for many years, she says she is in an unstable relationship and wasn't ready for a third child.

"I felt so depressed," she said with tears in her eyes. "You have to say goodbye to someone you don't even know."

Deanna Wambach -- the head doctor for Planned Parenthood in Arizona -- wears green hospital scrubs as she prepares to examine a patient in a room equipped with a gynecological examination chair and a model representing the female reproductive system.

She's worried. If the new administration goes through with its promise to defund Planned Parenthood, many of the patients the group serves -- typically low- to middle-income Americans -- will no longer have access to health services.

The group, which serves some 2.5 million men and women a year, relies on federal funding for more than 40 percent of its operating budget.

Gabrielle Goodrick, who practices abortions at a private clinic in Phoenix, denounced the threat to defund Planned Parenthood as nothing but a "smokescreen," given that it's been illegal to use federal funds for abortions for decades.

"The defunding never had anything to do with abortion," she said. "It's an attack on all abortion providers to demonize them."

She now fears a spike in unwanted pregnancies, and stresses that women who want abortions will find ways to get them.

Making it harder for women to have access to contraception or abortion will only lead to unwanted pregnancies or late-term abortions that can cost up to $3,500 dollars, Goodrick says.

In Arizona, which has some of the toughest legislations in the country, patients must foot the cost.

As a result, many desperate women are taking more risks.

"We definitely have seen patients ordering pills online," Goodrick said. "We've had patients we can't quite tell what happened but when you check their uterus, it seems a mess."

Nevertheless, pro-life groups such as the Susan B. Anthony List insist that cutting federal funds for Planned Parenthood would be "a major benefit to women's health."

Mallory Quigley, a spokeswoman for the group, says the funds could be reallocated to more than 13,000 community health centers that provide the same services -- but not abortions.

But experts point out that existing health centers will be unable to absorb Planned Parenthood patients.

In rural regions where cuts in subsidies and tougher legislation have led to the shutdown of Planned Parenthood centers, the authorities say they have seen a big uptick in sexually transmitted diseases even though other factors, such as drug addiction, also play a role.

Meanwhile, the immediate threat to defund Planned Parenthood is just an opening salvo in the battle against abortion.

If Trump's current nominee to the Supreme Court, Neil Gorsuch -- a judge known for his pro-life stance -- is confirmed, a majority of conservative justices could threaten the constitutional right to abortions itself.