'That’s what they have in dictatorships': Chris Wallace rips Priebus for wanting a 'state-run media' 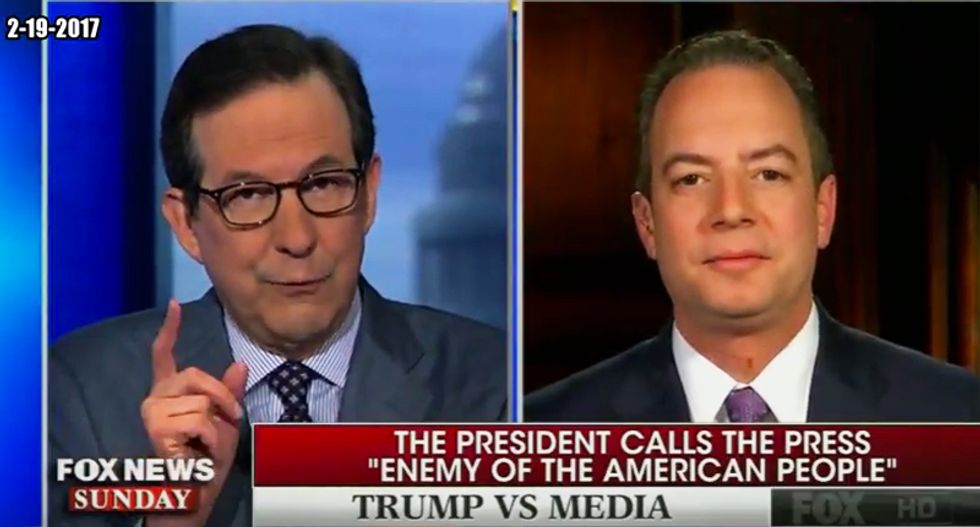 A combative Chris Wallace called out Trump Chief of Staff Reince Priebus Sunday morning over his attempts to dismiss reports of Russian involvement in the president's campaign as "fake news."

Addressing a New York Times report that claimed that top Trump operatives were in contact with the Russians prior to the election, Priebus complained about the media using "anonymous sources," before calling it "fake news."

"I can assure you, and I've been to say this, that the top levels of the intelligence community have assured me that that that story is not only inaccurate, but it's grossly overstated and it's wrong and there's nothing to it," Priebus asserted. "If I can say that to the American people, then what does it say about the story?"

"I get the fact that you don't like some stories," Wallace replied. "You say, because you weren't part of the campaign before so that you can't speak to that, you say that the intelligence community says that there were no contacts between anyone in the Trump campaign, no associates of Mr. Trump and anybody involved as a Russian agent, as to the campaign and collusion in the campaign."

"They made it very clear that that story in the New York Times is complete garbage," Priebus replied. "Quite frankly they used different words than that, okay?"

"Who was it that said that, " Wallace shot back.

"I'm not going to tell you," Priebus parried.

"Wait a minute, Reince," a frustrated Wallace exclaimed. "You just complained about unnamed sources. You're using an unnamed source."

"Reince, here is the problem, I don't have a problem with you complaining about an individual story," Wallace replied. "We sometimes get it wrong, you guys sometimes get it wrong. I don't have any problem with you complaining about bias. But you went a lot further than that, or the president went a lot further. He said that the fake media, not certain stories, that the fake media are an enemy to the country. We don't have a state-run media in this country, that's what they have in dictatorships."