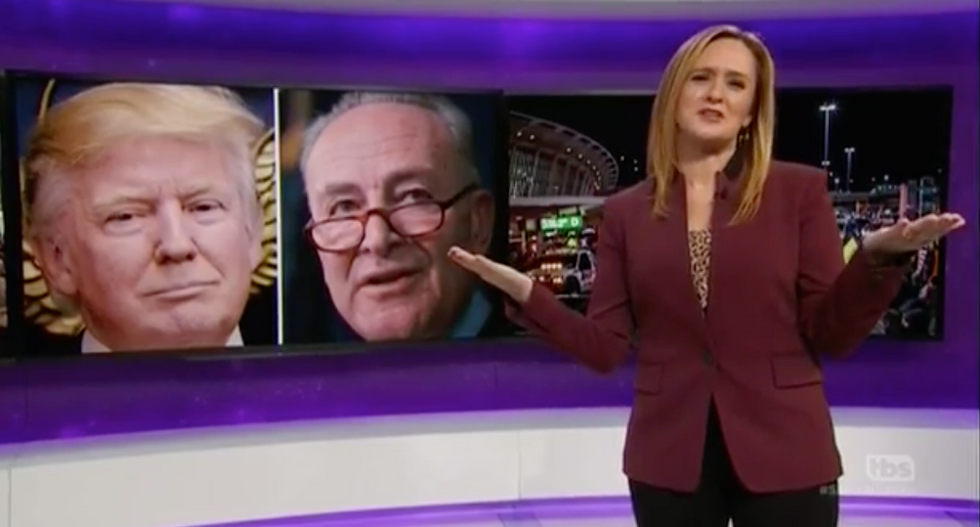 Samantha Bee on Wednesday tore into Donald Trump over his executive order restricting immigration from several predominantly Muslim countries, calling the administration’s roll out of the ban “the healthcare.gov of Islamophobia.”

“At a quarter-to-Shabbat on Friday afternoon … Donald Trump scrolled his polygraph malfunction of a signature on a sweeping travel ban, then lumbered back the resident to eat Funyuns and watch the five and his awesome edict to make the world a better place,” Bee began during Wednesday's episode of Full Frontal.

The comedian then aired a montage of news clips showing the chaos that swept through airports and agencies Friday nailing the president over his executive order, the "Ford Pinto of intolerance."

“The President of the United States calling the senate minority leader a crying sissyboy,” Bee said of Trump’s criticism. The comedian then referenced reports that Trump grabbed British Prime Minister Theresa May’s hand last week during her visit to the White House because the president suffered from bathmophobia, or fear of stairs.

“I’m sorry, who’s the bigger sissy?” Bee asked. “The Holocaust victim’s great-grandson who teared up over families being torn apart, or the guy who’s afraid to walk down stairs?

“Theresa May is lucky all he grabbed was her hand,” Bee added.