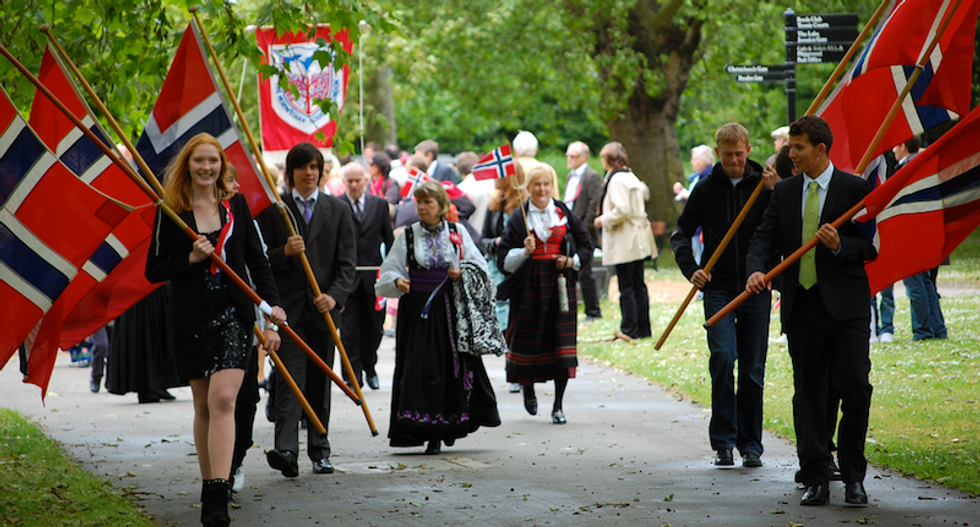 NBC News took a recent trip to Norway to speak with people living in what has been called the "world's best democracy" — the outlet set out to learn how Norway has become a vibrant democratic country and what the people had to say about the U.S.

Following President Donald Trump's election victory, the United States was downgraded in the annual Democracy Index from a "full democracy" to a "flawed democracy." However, the Economist notes that this decline is not a direct result of Trump, but rather was "caused by the same factors" that led to his victory, which include a lack of trust in both government and in elected officials.

On the other hand, the Economist Intelligence Unit ranked Norway as the best democracy in the world for the sixth consecutive year.

"There's something about our culture that says it's very important to vote," 18-year-old Aurora Aven told NBC. "Norway has such a good system, so no one feels left out and no one feels misunderstood. Everybody knows their voice will be heard."

According to NBC's reporting, the people of Norway are automatically registered to vote, and 78 percent of the population voted in the country's last election. Since 2015, three U.S. states — California, Oregon and West Virginia — all passed automatic voter registration laws.

According to the Brennan Center for Justice, universal, automatic voter registration would add up to 50 million eligible voters, would be less costly, and would increase the security of American elections. Even so, some Republicans oppose the initiative, including Alabama Sec. of State John Merrill. Merill said in an interview before the election, "just because you turned 18 doesn’t give you the right [to vote]" and suggested people would be lazy to not "get up off of their rear" to register on their own.

Another problem with the 2016 U.S. election was voter disenfranchisement, which Ari Berman reported for the Nation is a fierce attack on the Voting Rights Act spearheaded by the GOP, including strict voter ID laws as well as a lack of polling locations. Further, as CNN's Van Jones explained in a recent interview with Vanity Fair, mass incarceration also led the U.S. to where it is now.

This is not the case in Norway. Political adviser Torkil Vederhus told NBC that the people of Norway have a healthy relationship with the country's lawmakers, making its democracy effective. "People can feel like they're part of the democracy. They recognize their politicians as not part of some kind of elite, they're just regular people."

Vederhus added, "In United States, you have such a different system of democracy — there's a lot of money involved and it's a lot about how big a person you are and if you're important, or whatever."

"Norwegian people are engaged in politics and I think that's very good," said 56-year-old Torild Haustreis, who also noted, "I think the U.S. needs to build its election system again. It's not right the way they have it in the U.S. today."

NBC News reported, Norway is characterized as a social democracy, which the outlet notes is "the type of place Sen. Bernie Sanders dreams about." And even though taxes are high, government spending often funds public institutions like education and healthcare. "It's expensive but you pay your taxes and you get things out of it," said 18-year-old Nancy Adelaide Hancock.

You can watch their remarks below.