'They keep their promises': French town smitten with far right 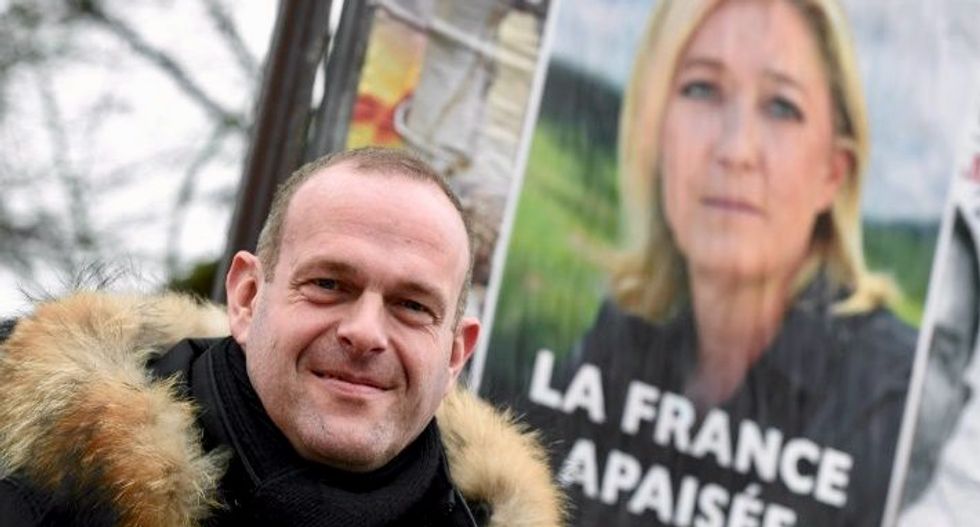 France's National Front (FN) is promoting the depressed former coalmining town of Henin-Beaumont as a showcase for far-right rule ahead of this year's election, with residents praising Marine Le Pen's party for "keeping its promises".

In 2014, the town of terraced houses in northern France was the first to elect an FN mayor in a single round of voting -- one of several local victories that Le Pen aims to convert into an upset in this year's presidential election.

Much of the growth of her anti-immigrant, anti-EU party has been in towns like Henin-Beaumont, where corruption scandals and mass layoffs have turned voters against mainstream politics.

Three years after they sent the scandal-hit Socialist Party packing here, residents of the town are still smitten with Mayor Steeve Briois, the grandson of a miner.

"Like a lot of people here I used to be a leftist but I switched camp and I'm not ashamed to say it. We were betrayed, we were robbed. This mayor, he does what he says he will do," said Elisabeth Develter, a retired supermarket worker.

Develter was among over 1,000 people who attended the mayor's New Year reception on Sunday, when Le Pen was guest of honour.

In a speech, Briois reeled off his promises fulfilled, from repairing pavements to organising a Christmas market to try to revive business in a town where unemployment is running at 18 percent.

Each action is loudly applauded. "Bravo!", some shouted.

Le Pen is riding high in the polls for the first round of the election in April but is currently forecast to be soundly beaten in a May runoff by either centrist Emmanuel Macron or the conservative Republicans candidate Francois Fillon.

The National Front leader has held up Britain's vote to quit the EU and Donald Trump's rise to the White House as proof that pollsters can get it wrong and that her nationalist ideas have gone mainstream.

As proof that voters have nothing to fear from the FN, she points to the affable Briois.

"Steeve is not at all intolerant, he doesn't politicise things or govern in an ideological way, he acts in the people's interest," she told AFP.

Bastien, a 32-year-old forklift operator in Henin-Beaumont who did not wish to give his full name, said he was tempted by a Le Pen presidency, on the basis of the party's performance in the town.

"If they keep their promises at the local level they will do so at the national level," he said.

In the 2012 presidential election Le Pen topped the first-round vote in Henin-Beaumont with 35 percent.

But the lingering stigma around the party bequeathed by her FN founder father Jean-Marie, a convicted anti-Semite, held her back nationally, leaving her trailing in third behind the Socialist Party's Francois Hollande and rightwing incumbent Nicolas Sarkozy.

Since then Le Pen's campaign to undemonise the party has begun paying off, with the FN topping France's vote to the European Parliament in 2014 and winning control of a dozen French towns the same year.

But a 2016 poll still showed a majority of voters rejecting her ideas, making it difficult for her to secure the 50-plus percent she needs to win a presidential runoff.

To win them over Le Pen has attempted to soften her image, adopting a pure red rose as her campaign symbol and posting pictures of herself with her cats on Instagram.

They point to a "Migrant-free Town" vote organised by Briois last year -- without the town having been asked to take in any of migrants pouring into Europe -- as proof of a hardline agenda.

"Here the FN's speciality is charity, but only for French nationals."

For Greens councillor Marine Tondelier, the FN is a "Jekyll and Hyde" party, all smiles with supporters while hounding NGOs, councillors and local journalists who are critical of it.

"They isolate people who resist and they're quite good at it," she said.

In Henin-Beaumont, the dissonant voices remain in the minority but Le Pen still faces a battle to win over many moderates, who see the FN as a threat to democracy.

"I hope Marine will be president," said Michele Facon, a retired car plant worker, while admitting she held out little hope.

"She will never get past the second round. The FN still scares people."