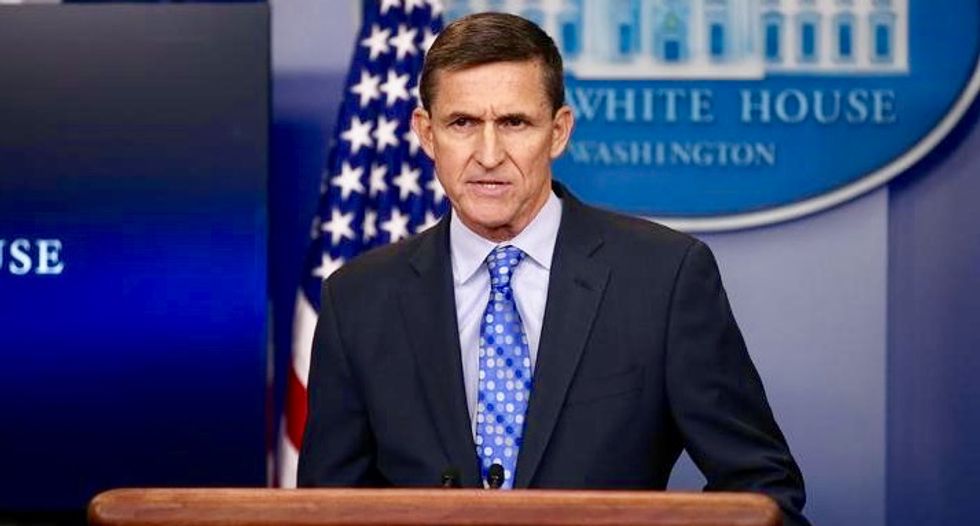 U.S. President Donald Trump took an aggressive posture toward Iran on Wednesday for test-firing a ballistic missile, with his national security adviser declaring "we are officially putting Iran on notice" for what he called a provocation.

The warning from Michael Flynn marked an abrupt change in policy and tone toward Iran from that of Trump's predecessor, Democrat Barack Obama, who had negotiated a 2015 nuclear deal with Tehran.

It was Trump's sharpest threat against a U.S adversary since taking office on Jan. 20, a warning that could foreshadow more aggressive economic and diplomatic measures against Iran.

Flynn told reporters that, instead of being thankful to the United States for the nuclear deal, "Iran is now feeling emboldened. As of today, we are officially putting Iran on notice.”

Iran confirmed on Wednesday it had tested a new missile but said it did not breach a nuclear accord reached with world powers or a U.N. Security Council resolution that endorsed the pact. The Islamic Republic carried out the test of a medium-range missile on Sunday, a U.S. official said on Monday, speaking on condition of anonymity.

Flynn said on Wednesday that the missile launch was in defiance of the 2015 Security Council resolution.

While signaling a more muscular U.S. foreign policy that Trump has said he would pursue, the meaning of Flynn's comment was unclear.

Three senior U.S. officials who briefed reporters at the White House said a range of options, including economic sanctions, was being considered on how to respond and that a broad review was being conducted of the U.S. posture toward Iran.

The officials, who spoke on condition of anonymity, declined to say whether a military option was on the table.

"We are in the process of evaluating the strategic options and the framework for how we want to approach these issues," one official said. "We do not want to be premature or rash or take any action that would foreclose options or unnecessarily contribute to a negative response."

Crude oil futures rallied on Wednesday, jumping more than $1 a barrel on geopolitical concerns after Iran confirmed the missile test and bulls found support in reports on production cuts.

The Islamic Republic has test-fired several ballistic missiles since the nuclear deal in 2015, but the latest test was the first since Trump became president.

Flynn, in his first appearance in the White House press briefing room, said the missile launch and an attack against a Saudi naval vessel by Iran-allied Houthi militants off the coast of Yemen underscored "Iran’s destabilizing behavior across the Middle East."

Richard Nephew, a former Obama administration official who was a U.S. negotiator with Iran on the deal, said Flynn's comment could backfire.

"I think this will create an impetus for the Iranians to 'resist' and 'defy' more, and that could well create an escalatory cycle with Iran," he said. "Being tough with Iran is one thing, but you have to back it up and bring partners with you. Is Flynn prepared to deal with what comes from that?”

Trump has frequently criticized the Iran nuclear deal negotiated by the Obama administration, calling the agreement weak and ineffective.

While campaigning in September, then-candidate Trump vowed that any Iranian vessels that harass the U.S. Navy would be "shot out of the water" if he is elected.

A section of U.N. resolution 2231 calls on Iran "not to undertake any activity related to ballistic missiles designed to be capable of delivering nuclear weapons, including launches using such ballistic missile technology."

Trump and Saudi Arabia's ruler, King Salman, spoke by phone on Sunday and were described by the White House as agreeing on the importance of enforcing the deal and "addressing Iran’s destabilizing regional activities."

Mark Dubowitz, head of the Foundation for Defense of Democracies, a Washington-based policy group that advised Trump during the campaign and has continued to consult with the new administration on Iran, said the missile test was the 12th since the 2015 Iran deal.

"It’s going to provide further justification for what we expect over the coming months, which is new congressional sanctions, new administration sanctions and a message ... that Iranian aggression needs to be punished and deterred,” Dubowitz told Reuters on Tuesday.

Trump is due to hold talks with Israeli Prime Minister Benjamin Netanyahu, a strident critic of the Iran deal, at the White House on Feb. 15. The two leaders are expected to try to coordinate strategy on Iran, Israel’s regional archfoe.