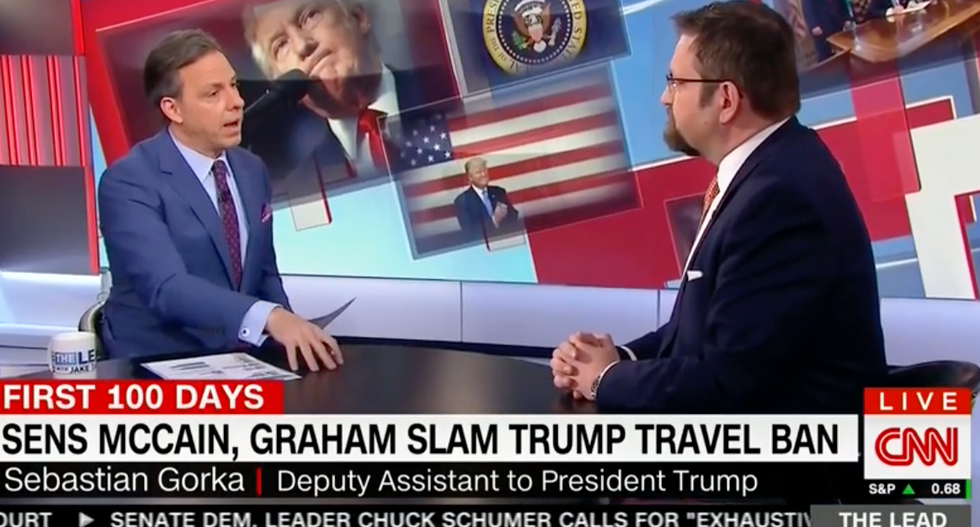 CNN’s Jake Tapper on Wednesday grilled Sebastian Gorka over the president’s immigration executive order, even as the Deputy Assistant to the President insisted fears over the ban being used as a recruitment tool for ISIS are "utterly irrelevant."

Discussing Trump’s controversial executive order restricting immigration from several predominately Muslim countries, Tapper asked Gorka—a former National Security Affairs editor for Breitbart— about the “lack of coordination” in implementing the ban. Tapper pressed the deputy assistant over whether the Trump administration will “take to heart” some of the criticisms from Republicans on Capitol Hill about how the executive order was executed.

Gorka immediately shut down any suggestion that the Trump administration would heed criticism of its handling of the executive order, telling Tapper it’s “not reflective of the truth” to suggest there were problems with the ban’s rollout.

“As somebody who’s inside … I have to just laugh when I see something in the newspaper,” Gorka said.

“Okay, but members of Congress, Republican leaders, they say they didn’t know this was coming and they were surprised,” Tapper reminded Gorka. “Obviously there was a lot of confusion in airports, people on the front lines…”

Despite numerous reports to the contrary, Gorka insisted there was “no confusion” in airports, adding the ban was executed with “incredible efficiency.”

Tapper then asked Gorka about criticism from Republican leaders—including Sens. Lindsey Graham (R- SC) and John McCain (R-AZ)—who argue the executive order is a "propaganda tool for ISIS and similar groups and could put US troops at risk.”

Gorka shot back that the notion “any document signed or executed in the United States” would have an impact on ISIS recruitment is “utterly irrelevant” and “absurd.” This, despite the fact that one of Trump’s most aggressive attacks on Barack Obama’s ISIS policy centered around the former president’s reluctance to use the term “radical Islamic terrorist.”

Gorka followed up by saying that any suggestion Trump’s executive order could impact ISIS recruitment comes from the “bubble that the media has created for itself on the left and the right coast.”

Tapper pointed out that stories emerged over the weekend involving refugees and people with green cards who were caught up in the ban. “There’s another side to this,” Tapper pressed.

Gorka insisted the ban has “nothing to do with religion, nothing to do with xenophobia,” and everything to do with keeping the U.S. safe, at which point Tapper laid down the facts: “There is not any example of a refugee successfully carrying out a terrorist attack in this country,” Tapper said.