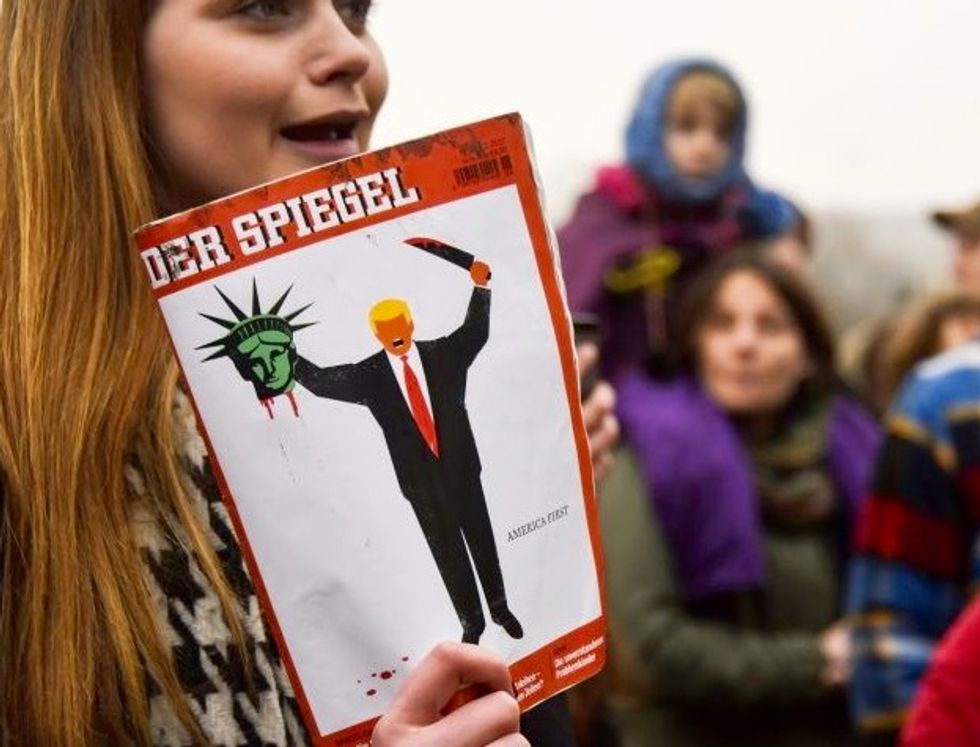 A young woman holds the last edition of "Der Spiegel" magazine with a cover designed by Edel Rodriguez, as she protests against the travel ban imposed by US President Donald Trump, on February 4, 2017, in Berlin

German news magazine Der Spiegel sparked controversy Saturday with a cover depicting US President Donald Trump holding the severed head of the Statue of Liberty in one hand and a bloodied knife in the other.

The weekly used for its front page an image by US-Cuban artist and political refugee Edel Rodriguez with the Trumpian slogan "America first" next to it.

"On our cover the American president beheads the symbol which has welcomed migrants and refugees to the United States since 1886, and with democracy and freedom," Spiegel's chief editor Klaus Brinkbaeumer told German news agency DPA.

The image, which shows an orange face featureless save for a wide-open mouth, was seized upon for discussion by other media outlets in Germany and beyond.

Bild tabloid saw a direct parallel with Mohammed Emwazi, the British national known by the pseudonym "Jihadi John", who was seen in several videos showing the beheading of Islamic State hostages.

Speaking to Bild, the vice-president of the European Parliament, Alexander Graf Lambsdorff of Germany's liberal Free Democrats, slammed the image as being in "bad taste" and one which "plays on the lives of terror victims in a very nasty manner."

Liberal conservative broadsheet Frankfurter Allgemeine Zeitung for its part warned that if the media demonised Trump that could play into his hands.

The paper added that such images could underpin Trump supporters' beliefs that the media are biased against him and "belong to the establishment, which he is allegedly up against."

The image was widely shared on social media and also featured on posters waved by protesters attending a rally Saturday in Berlin to denounce Trump's temporary ban on migrants from seven mainly Muslim countries.

In November, following Trump's election win, Spiegel depicted him as a comet crashing to Earth.

Saturday's front cover image harks back to a similar, though less bloody, one used by the New York Daily News in December 2015.

That came after Trump first mooted a ban on Muslims and building a wall on the border with Mexico.

The Washington Post quoted Rodriguez on his rationale for the image.

The artist said he wanted to draw a parallel between Islamist extremist ideas and Trump's radical policies.

"Both sides are extremists, so I'm just making a comparison between them," he said.