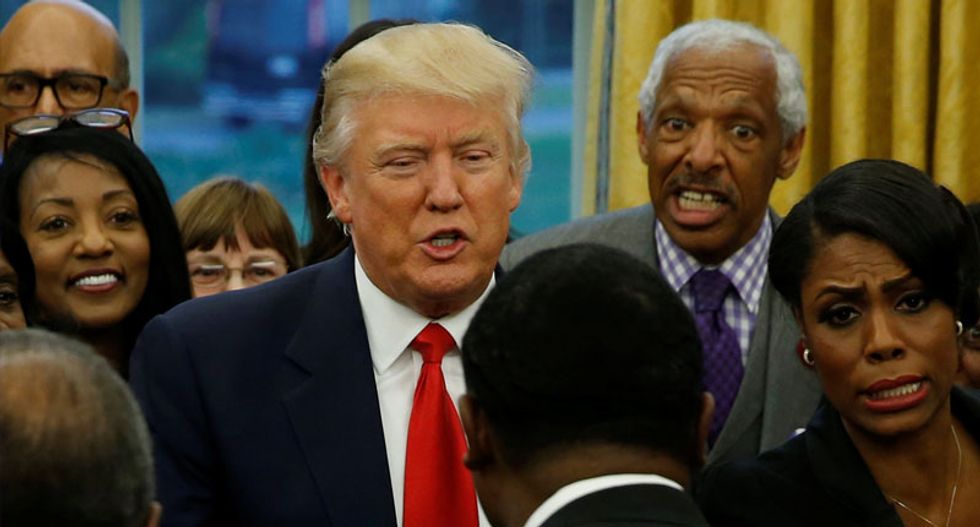 Donald Trump gets a chance to put the rocky start to his presidency behind him on Tuesday night with a speech to the U.S. Congress where he will lay out his plans for the year including a healthcare overhaul and military buildup.

The speech at 9 p.m. (0200 GMT Wednesday) in the chamber of the House of Representatives will be Trump's biggest chance yet as president to command a large prime-time audience and describe his agenda after a first month in office characterized by missteps, internal dramas and acrimonious disputes with the news media.

The address, which Trump has been writing with aide Stephen Miller and others, will include some gestures toward unifying a country polarized by a bitterly fought election and divided in the early days of his presidency.

An average of recent polls by Real Clear Politics put his approval rating at about 44 percent, low for a new president.

White House spokesman Sean Spicer said the theme of the speech to Congress, which is controlled by Trump's fellow Republicans, would be "the renewal of the American spirit" and that it would be grounded in how to solve the problems of everyday Americans.

"He will invite Americans of all backgrounds to come together in the service of a stronger and brighter future for our nation," Spicer told reporters on Monday.

Trump, whose inauguration speech on Jan. 20 painted a dark picture of the United States and referred to “American carnage,” told Reuters last week in an interview that his address would be a speech of optimism.

The president faces a host of questions going into his first speech before a joint session of Congress.

Specifics of his plan to overhaul former Democratic President Barack Obama's signature healthcare law have not been released. He has yet to describe how to pay for a sharp increase in planned spending on rebuilding U.S. roads and bridges.

His proposals to cut taxes for millions of people and corporations have not been sketched out. His strategy for renegotiating international trade deals remains unclear. He took delivery on Monday of a Pentagon proposal for fighting Islamic State militants and must decide on it in the days ahead.

He seeks a big increase in defense spending but that plan includes a demand that non-defense federal agencies cut funds to offset the cost, painful reductions likely to face opposition in Congress. Some Republicans have said the proposed 10 percent defense spending increase is not enough to meet the military's needs.

Asked in a Fox News interview broadcast on Tuesday how he would pay for the increased spending, Trump said, "I think the money is going to come from a revved up economy."

His executive order temporarily banning people from seven Muslim-majority nations on national security grounds stirred protests and was put on hold by federal courts. He was expected to sign a replacement order on Wednesday.

Tim Albrecht, a Republican strategist in Iowa, said the speech was Trump's best opportunity to date to explain where he wants to take the country. Albrecht doubted there would be much in the way of conciliatory language.

"Despite those at home or in the audience, he’s going to put forward what he believes needs to be done just as he did in the two years he ran for president," he said. "As with everything in Trump land, conventional wisdom is thrown out the window."

Democratic lawmakers plan to attend the speech and give their reactions to reporters afterward, as is the custom during similar events, according to congressional aides.

But at least one Democrat – Representative Luis Gutierrez of Illinois, has said he will protest Trump’s speech by refusing to applaud or give him a standing ovation, as also is a custom at presidential speeches.

Democrats aim to show their displeasure with Trump policies by inviting an array of guests to the House visitors’ galleries to highlight their opposition to his agenda.

Democratic Senator Dick Durbin of Illinois has invited Aaima Sayed, a medical student who participates in an Obama administration program that defers deportation for youths brought to the United States illegally. Trump has not given a definitive answer on whether he will leave the program in place.

Other Democratic guests include Muslim immigrants, an advocate of programs for people with disabilities and people who want new gun control measures.

Trump's guest list illustrates some of his favorite themes: the widows of two California police officers killed by an illegal immigrant, a young woman who benefited from a Florida school choice program and the daughter of a pharmaceutical entrepreneur who founded his company to look for a cure for her illness.

Another guest will be Maureen Scalia, wife of late Supreme Court Justice Antonin Scalia, a hero to conservatives whom Trump hopes to replace on the court with Neil Gorsuch.

House Democratic leader Nancy Pelosi told reporters on Monday that if Trump’s address was anything like his inaugural speech, “it will be a very sad evening for our country.”