Ukraine appeals for help against Russia as fighting flares 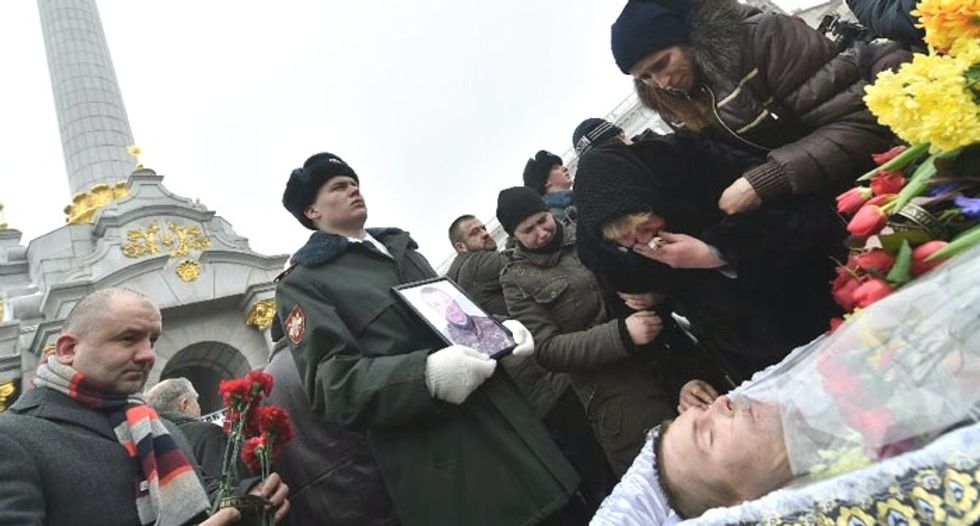 Ukraine's president appealed for more global pressure against Russia on Thursday as Moscow-backed rebels and government forces clashed around a frontline town in a surge of fighting that has claimed a reported 23 lives.

The sworn foes have been exchanging mortar and rocket fire near the flashpoint eastern town of Avdiivka that sits just north of the pro-Russian rebels' de facto capital of Donetsk.

The outburst of violence since Sunday has reignited fears of full-scale warfare returning to eastern Ukraine after a relative lull in 33 months of bloodshed in the European Union's backyard.

The Avdiivka shelling left more than 20,000 people without heat or water in freezing winter weather and authorities scrambling to provide relief.

The escalation in fighting has sharpened attention on a conflict that had slipped from recent focus despite having claimed more than 10,000 lives.

The fresh fighting comes at a potential watershed moment for Ukraine as it seeks to maintain US support despite President Donald Trump's bid to mend ties with Russia's Vladimir Putin.

Moscow and Kiev have traded blame over who started the latest violence. AFP reporters have witnessed the rebels on the attack.

"The world should be more actively putting pressure on Russia in order to end the shelling," Ukrainian President Petro Poroshenko said in a statement.

The Ukrainian army's general staff also convened a meeting of the G7 group of global powers representatives and the UN Security Council members' ambassadors to Kiev focused on the latest violence.

"Moscow was putting Avdiivka on the brink of a humanitarian catstrophe," Poroshenko said.

But Russian President Vadimir Putin countered that the latest fighting was "provoked by the Ukrainian side".

The seemingly irreconcilable differences are rooted in Kiev worries that Putin is trying to stamp his authority on eastern Ukraine to give him leverage over Trump on other global issues.

NATO chief Jens Stoltenberg did not blame Russia directly but said that Moscow had "considerable influence" over the militia forces now on the attack in east Ukraine.

Moscow denies accusations from Kiev and its allies that it sparked the war in 2014 and has sent in troops to keep Ukraine under its thumb after its tilt towards the West.

Thursday morning began with echoes of rocket fire on the outskirts of blue-collar Avdiivka and the death of a woman in a shelling attack.

The insurgents also said one more of their fighters was killed in the clashes while the Ukrainian army reported two deaths.

Army officers were distributing gruel and tea to hundreds of people in makeshift street kitchens as the sound of exploding shells shattered the air.

They also set up seven camps where people could warm up with temperatures falling to minus 20 degrees Celsius (minus four degrees Fahrenheit) at night.

"Right now we are making buckwheat and millet porridge," said a 40-year-old serviceman who gave his name only as Taras.

"We hope to get some canned meat in the evening," he told AFP.

The industrial town of Avdiivka was seized by separatists when the conflict started in April 2014 after the ouster of Ukraine's pro-Russian leader but was recaptured by government forces several months later.

The town has a giant coke plant that produces natural gas for generating heat and electricity and also has important roads used by the separatist fighters to move around machinery and weapons.

Moscow and Kiev agreed on Wednesday to promote a new truce that would also open escape routes out of the devastated town.

But coke plant spokesman Dmytro Murashko told AFP that those trying to leave Avdiivka fell under heavy shelling and had to return to the town.

A Ukrainian fighter from Kiev who only gave his nom de guerre -- 'The Zoo' -- said he was certain that Russian forces were leading the offensive.

"No one else could coordinate this so well," he told AFP.