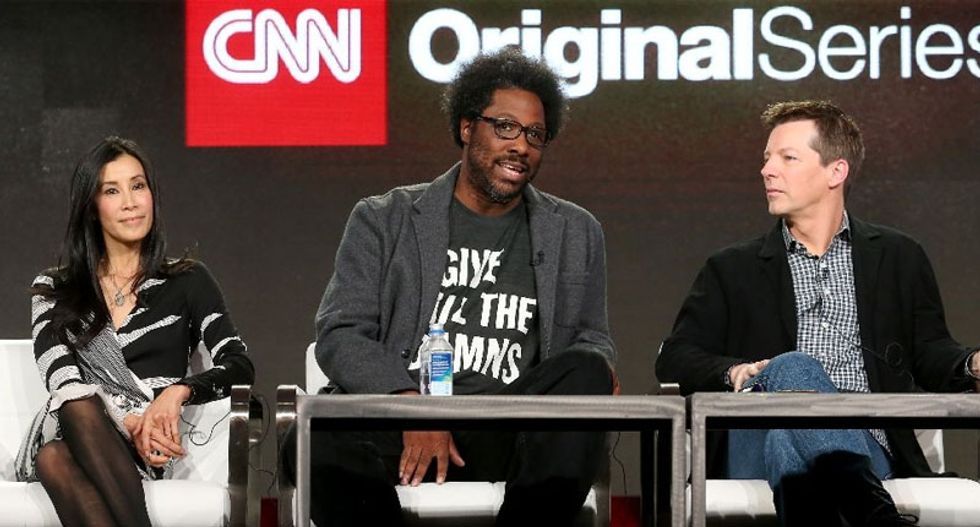 As President Donald Trump steps up his attacks on the "dishonest" press, major American media outlets are seeing an apparent resurgence after years of downward spiral.

Newspapers, radio and television had begun to see growth during the 2016 election campaign, and that has accelerated since the inauguration, despite -- or perhaps because of -- the vitriol from the new president and his aides.

While much of the industry has been slumping in recent years, the war between the president and the news media has seemingly drawn in a flood of new readers, listeners and viewers, including many willing to pay for news.

CNN viewership rose a stunning 94 percent during the week of Trump's inauguration in January, even as the president assailed the cable news operator as a purveyor of "fake news."

The New York Times announced this week it added nearly 300,000 paid digital subscribers in the fourth quarter of last year, the highest number since it began its paywall model.

Trump's hometown newspaper has vowed to invest $5 million in covering the new administration even as the president continues his Twitter barbs about the daily.

On Sunday, the president tweeted: "Somebody with aptitude and conviction should buy the FAKE NEWS and failing @nytimes and either run it correctly or let it fold with dignity!"

Gordon Borrell, a media analyst with Borrell Associates, said Americans are beginning to realize the value of independent media, and are in many cases showing a willingness to pay for it.

"The election of Donald Trump has been a seminal moment for online subscriptions," Borrell said. "What's more valuable is not the news itself but the perspective."

Borrell said that Trump's attempts to quickly shake up government and policy have made consumers aware of the need for news.

"Right now, there's news every single day. It's a mad rush, a fire hose," he said. "This is good for the paid news industry."

Trump's apparent disregard for facts -- such as his persistent claims of a record inauguration audience and allegations of millions of fraudulent votes cast -- has also played a role in the media's revival.

In a campaign on Twitter, celebrities and others vaunted the value of paying for news with the #PressOn hashtag.

Comedian Ben Stiller joined the effort, tweeting, "We all need to accept the same truths. Facts are facts. Subscribe to a real journalism outlet."

Among other media outlets, National Public Radio said the audience for its flagship news program "All Things Considered" jumped 20 percent in November.

Media that are more friendly to Trump have gotten a lift too.

Fox News, which is home to many conservative commentators, has become the number one non-premium cable channel, overtaking for the first time the sports channel ESPN.

Even outside the big national media, the Trump effect seems to be significant.

The Seattle Times spokeswoman China Levy said the newspaper in the Pacific Northwest has seen growth in internet traffic and subscriptions.

"Since the election, we have seen a notable uptick in traffic and users, as well as subscribers," she said.

"While we know the election and current political climate is contributing to our success, the extent to which that is the case is unclear."

The same is the case at the Minneapolis Star Tribune, according to marketing chief Steve Yaeger, who said, "The election has been of great interest to Minnesotans and we've seen that engagement reflected in rising subscription rates, engagement with our digital properties and even single-copy newspaper sales."

Dan Schaub, corporate director of audience development at the newspaper chain McClatchy, also cited a "nice uptick" for the group which includes the Miami Herald and Kansas City Star.

"We've heard from consumers that there really is a vibrant desire on the part of the consumers to get facts and to get the truth and to turn to what they know are good brands and credible sources," he said.

It remains to be seen if the recent gains will be sustained or if the downward trend -- with many people relying on free online news -- will resume at some point.

Analyst Borrell said he believes consumers won't abandon their interest in news even if tensions ease.

"There will probably be a little churn, but for the most part, people are resistant to disconnect their information sources after the big surge or the key interest ends," he said.