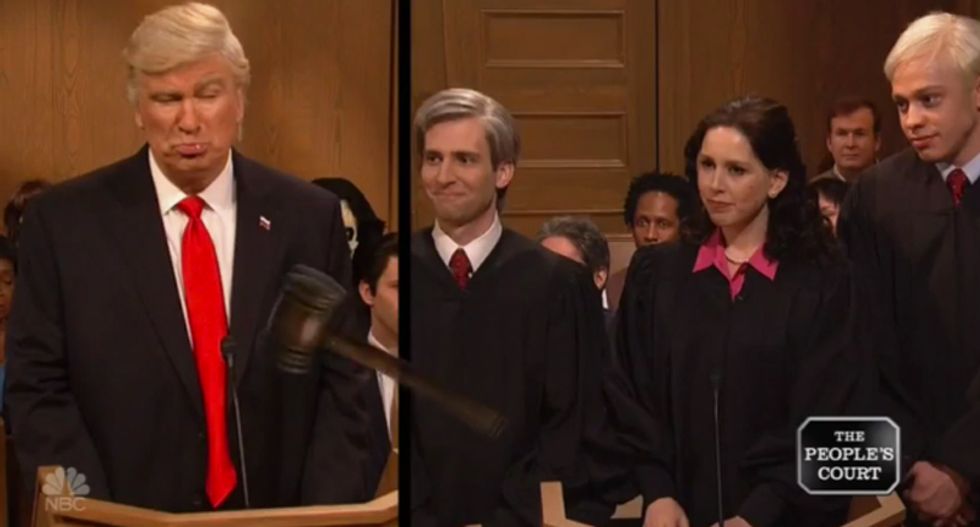 Baldwin, who was making his highly anticipated 17th appearance on SNL, portrayed Trump suing the justices of the 9th Circuit Court for overturning his immigration ban -- and choosing television's People's Court as the proper venue because, "I'm a TV president."

As the judge explains, "Mr. Trump, you understand this is a TV court?" Baldwin's Trump replies, "That's okay, I'm a TV president."

Asked to state his case, Trump gets into the particulars.

"Thank you judge, or what do you call a lady judge? A flight attendant? Something like that?" he begins. "I signed a tremendous travel ban, I didn't read it but I signed it. People took pictures of me holding up the paper.  Very official. And these judges

have been very disrespectful. I'm right, they're wrong. I want the ban reinstated -- also I want $725."

After eventually ruling against Trump, the judge (played by Cecily Strong) makes a demand of him.

"Lemme just say, you're doing too much," she admonishes him. "I just want one day without a CNN alert that scares the hell out of me. I just want to relax and watch the Grammy's -- and no one has ever said that."