WATCH: Bill Maher blisters the GOP for letting their 'assh*le son' Trump sell out America to the Russians 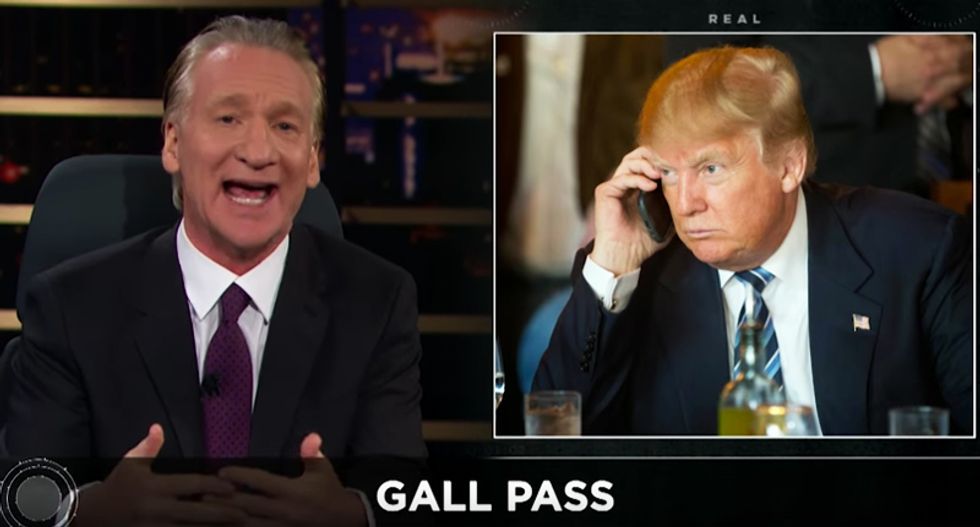 In a particularly brutal 'New Rules' segment, Real Time host Bill Maher ripped into Republicans -- and the people who elect them -- for getting away with "selling out" their own country and letting President Donald Trump act like a crazy person.

According to the HBO host, Republican are given a pass on being unpatriotic simply because they have a "Magic (R)" after their names.

"Someone has to tell me what's magic about a capital R," Bill Maher asked. "The kind that goes after your name if you are a Republican. Because if you have one of those, you can get away with pretty much anything when it comes to selling out, cursing out, or compromising your own country."

"When it was Hillary Clinton with an unsecured email server, Republicans wanted to 'lock her up,"He continued. "But President Trump still uses the unsecured Android phone he had before he was elected. And he has been warned that with an old consumer grade phone like that someone could easily hack into his Twitter account and start posting crazy messages. And how would we be able to tell?"

"If you have the magic (R), no problem. Trump repeatedly said he was going to donate to military charities. Then didn't. Then lied about it. He compared our intelligence agencies to Nazis. He said McCain who spent five years in a Vietnamese prison wasn't a war hero because 'I like people who weren't captured."

"I have got to say to all you flag waving Right Wingers who always say, 'I am not just going to stand here and let you run down America,' You are standing there and letting Trump run down America," Maher remarked. "Donald Trump would go to the Tomb of the Unknown Soldiers and say, 'Maybe if he had done something he wouldn't be so unknown.' Republicans would be okay with that too."

"Reagan sold weapons to Iran a country they all want to bomb now. And instead of being impeached he was elevated to sainthood," Maher lectured. "Why do Republicans get away with this? Why do they have patriotic immunity? America is like a dysfunctional family. The Democrats, are the older mature son who works hard and does everything right but somehow it is never good enough. And the Republicans are the young assh*le son who is a f*ck-up and it doesn't matter how many times he crashes the Camaro, daddy buys him a new one."