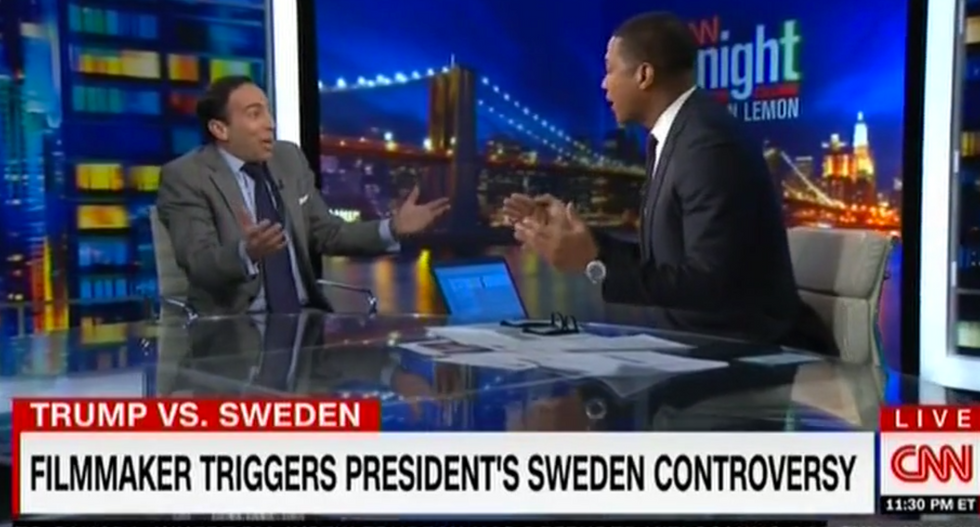 CNN’s Don Lemon on Monday confronted the documentary filmmaker who prompted Donald Trump to erroneously claim that something happened “last night in Sweden,” hammering him for manipulating numbers in order to fit an anti-immigrant narrative.

Lemon asked Ami Horowitz—the mastermind behind the Fox News segment Trump referenced during a weekend campaign rally in Florida—how he feels having influenced the president “to spread what really amounts to false information.”

Horowitz called Trump’s acknowledgement of his film “surreal,” adding it’s “unfortunate that he had the misstatement, but it’s been all good for me.” The filmmaker said he “can’t discern” what the president meant by his “look at what’s happening last night in Sweden” comment, but argued he didn’t understand how the press came to the conclusion that Trump was referring to a specific incident (despite the president having clearly said “last night in Sweden” during his speech).

“The president has to be … precise with his words, because the whole world is watching,” Lemon reminded Horowitz, going on to note there’s “no correlation between immigrants and a spike in crime.”

Lemon then targeted Horowitz’s use of data in the documentary, at one point explaining to the filmmaker the nuances and intricacies of data analysis.

“The numbers go up and down every year,” Lemon said as Horowitz tried to defend the data he used.

The pair got into a particular contentious exchange over data surrounding rape in the European country, with Lemon pointing out there’s “no correlation between rape and immigrants.”

“I’m saying there is!” Horowitz shot back.

“I don’t want to be rude, but are your ears and your eyes working?” Lemon asked Horowitz. “Because the numbers … don’t show what you’re saying. You’re taking the numbers and manipulating them.”