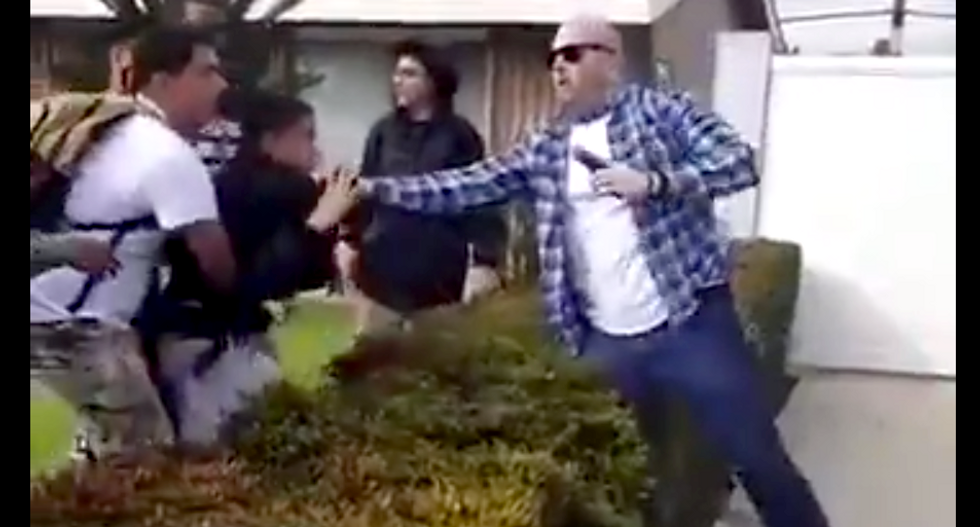 Officer holds a gun at a teen.

An off-duty Los Angeles police officer on Tuesday opened fire on a group of male juveniles after a physical confrontation with a 13-year-old boy, KTLA 5 reports.

Anaheim Police Sgt. Daron Wyatt said no one was struck by the gunfire; police later arrested two of the boys, one for making criminal threats and battery and another for assault and battery. The Orange County District Attorney's Office rejected the charges. No charges were filed against the officer.

Several videos of the incident were posted on Youtube, Twitter and other social media sites. They depict a confrontation between the off-duty officer and a group of young boys, one of whom appears to physically assault the officer. The officer eventually pulls out his gun as someone off-camera points out “he’s just a kid.”

The officer later fired his weapon.

“We are aware of numerous videos being posted on YouTube and other Internet sites,” Anaheim police told the Los Angeles Times. “We cannot authenticate the validity of these videos as they were not recorded or posted by APD. However, they do appear to depict portions of the incident in question.”

Sgt. Wyatt said the confrontation began over an “ongoing issue” with the kids walking across the officer’s lawn, which culminated in a verbal threat against the officer and prompted him to draw his gun on the child.

LAPD spokesman Capt. Andy Neiman said the department has launched an internal investigation into the incident, which he described as standard procedure when an officer fires his gun.

“We will continue to conduct the internal investigation to determine the actions of the officer and the circumstances, and then we’ll consult with the Orange County district attorney as well to determine if there’s any issues,” Neiman said.

Despite no charges being filed, the 13-year-old's mother—who asked to remain anonymous—said the incident made her fear for her family.

“I still fear for our lives, for him living right down the street from us,” she said, tearing up. “Him being an officer.”