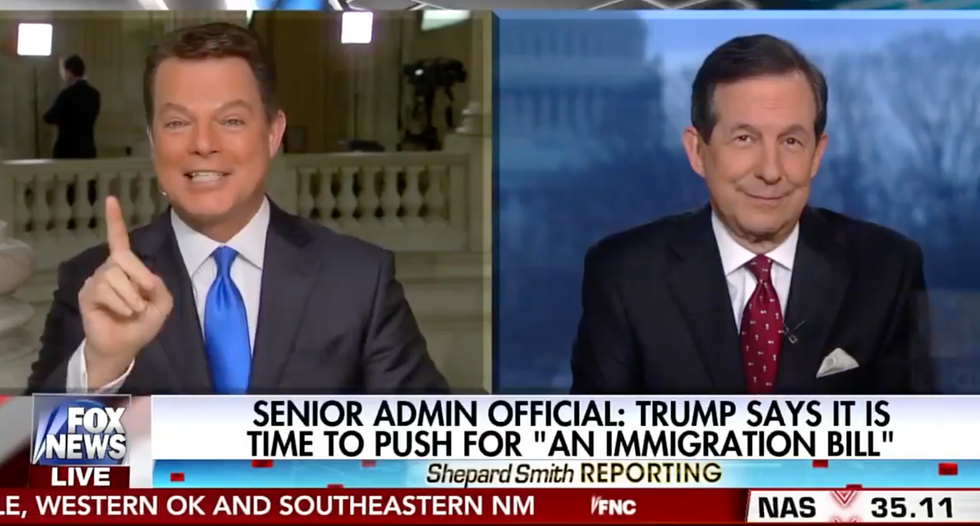 Discussing Trump’s suggestion Tuesday that he’s willing to consider comprehensive immigration reform, Smith noted the president’s change “isn’t just an olive branch” to Democrats, it “is a break from everything that we’ve heard throughout [the campaign].”

Smith asked if undocumented immigrants who haven’t committed crimes in the country can “set aside” fears about deportation. Wallace responded that he wasn’t in a position to answer that question.

“Is that what they said though?” Smith pressed. “You were in the meeting.”

Wallace responded that a “senior administration official” indicated that was the case, prompting Smith to rail into Trump’s criticism of anonymous sources.

“I’m not, I’m just making a point!” Smith shot back. “The point should be made. Don’t use anonymous sources, except for the ones we send out to you anonymously. Those anonymous ones are awesome.”

Wallace repeated that the “clear implication” is that people who have not committed violent crimes will be safe under Trump’s immigration plan.

“That sounds exactly where we were a year ago and two years ago!” Smith shot back. “That’s no change that I can hear.”

Wallace conceded Trump’s new immigration position is “certainly different” from what he said on the campaign.

“Well yeah, that’s for sure—so many things are,” Shep said.

Smith asked Wallace if any representatives from the networks Trump’s referred to as the “enemy of the people” were at the meeting. Wallace tried to praise the president, insisting if “people could see this president, who is different in private,” causing Smith to go off on his Fox News co-host.

“I know he is but that’s not what he wants people to see,” Smith said. “He wants people to think there’s a major war against organizations that are reporting facts he doesn’t like. When you’re in the room with him, it’s all good. But when you’re on TV he vilifies you and treats you like you’re doing something wrong, when you’re actually doing everything right. That’s annoying.”