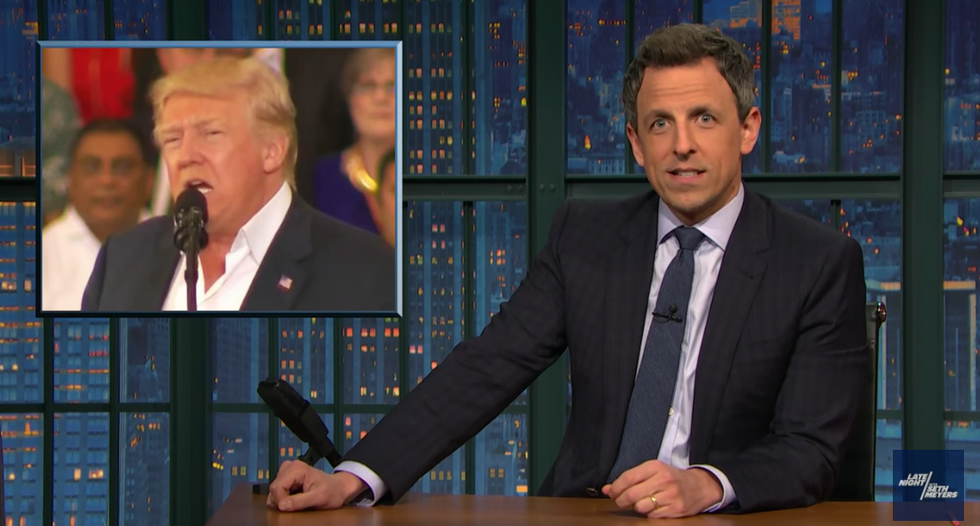 Donald Trump confused a lot of people on Saturday when he implored a group of campaign rally-goers to “look what’s happening in Sweden” based off a discredited report alleging an increase in crime rates as a result of the European country’s immigration policies.

One such person was Late Night host Seth Meyers, who torched Trump’s flub on his “Closer Look” segment Monday night. Meyers showed a news segment that explained Sweden has been openly mocking the president’s comments.

The Late Show host noted it’s difficult to keep up with the Trump presidency, as, “on one hand, you’ve got the genuinely ominous things he’s done—from declaring the free press the ‘enemy of the people’ to preemptively blaming a judge for future terrorist attacks,” on the other, you have reports that the president forced Chris Christie to eat meatloaf during one of their meetings.

“Look how white that photo is,” Meyers joked. “If you print that photo out, you can use it again as a blank piece of paper.”

The host also tore into the president for his declaration that the press is “the enemy of the American people”—a statement the president tweeted, then deleted, then retweeted from his personal Twitter account Friday.

“Even when Trump wants to come off as an authoritarian strongman, it turns out, he’s still a buffoon,” Meyers said. “You know, when you have to double-clutch on your authoritarian declaration, you sound less like a terrifying dictator and more like that guy at the bonfire who can almost play guitar.”

Watch the full video below, via NBC: