'What a president says is more important than a candidate’: Jake Tapper goes off on Trump for lying 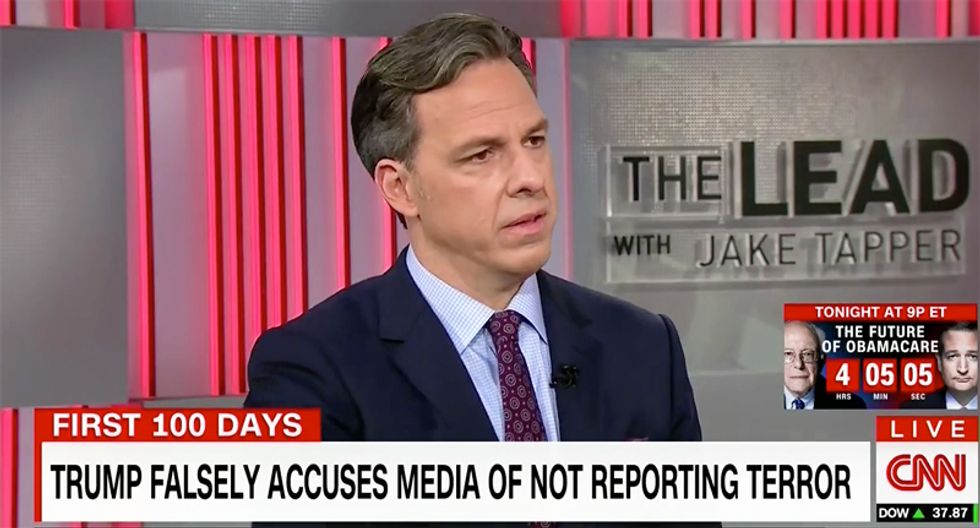 Following a fairly contentious interview with Trump senior adviser Kellyanne Conway,  CNN host Jake Tapper convened a panel to discuss Conway's defense of the president, saying she doesn't seem to realize there is a difference in coverage of  "candidate Trump" and "President Trump."

After panelist Karen Tumulty stated, "It's hard to follow any line of logic in any of her answers. I think at this point the most charitable read on this is that Kellyanne Conway is extremely exhausted, it showed in her face and it showed in her answers," Tapper initially defended the Trump spokesperson who has become a lighting rod for the administration.

With the panel agreeing that Conway's main argument seemed to be that the president deserves deference from the media, no matter what he says, due to his office, Tapper defended the media, saying Trump's off-hand comments have real world implications.

"I think she has a point in that the media is more aggressive," Tapper explained. "But I think that there is a good reason for it and it's exactly what you just said. The stakes are much higher. He's the president of the United States. a comment he makes about Boeing will affect Boeing's stock. A comment he makes about a judge, who knows what could happen? A comment he makes trying to discredit the entire media could actually have an effect on things. What a president says is more important than a candidate."

"She seems to think we're supposed to show deference," panelist Kirsten Powers added. "That's not something I've ever heard before."