'What stories are phony?': Don Lemon nails GOP pundits when they can't give 'fake news' examples 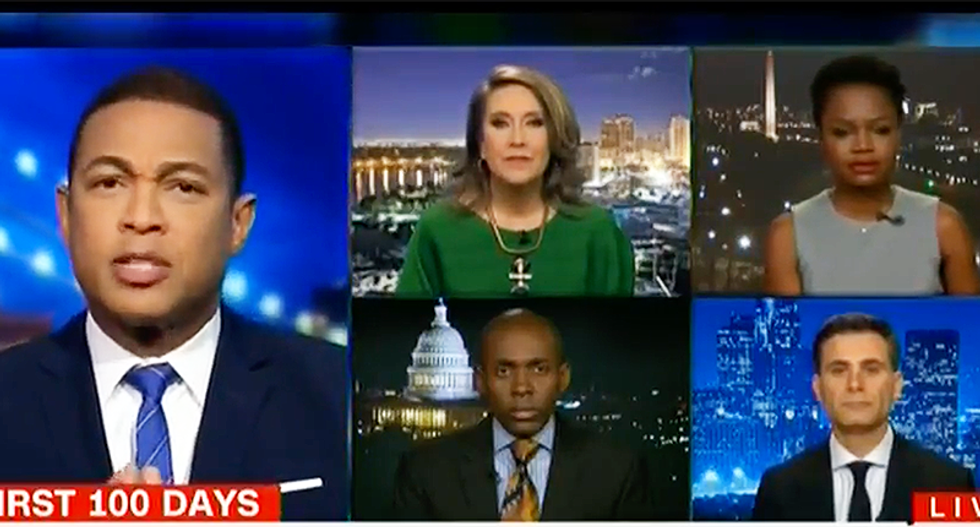 In an interview with Fox News this week, Donald Trump's Chief of Staff Reince Priebus said that the White House is too often distracted by fielding off phony stories. That was his excuse for the reason that the president has been unable to achieve as much as other presidents have during his first month in office.

"When you have to spend half your day putting out phony stories, that becomes a distraction," Priebus told "Fox and Friends."

But when host Don Lemon asked conservative panelists Paris Denard and Andrew Bauer to name the "phony stories" they had trouble coming up with them.

"It doesn't matter what the -- what he does, it's always negative," Bauer responded.

"That's he and Putin have a love fest for example," Bauer said. "You keep pounding they have a bromance."

The panel remarked that Trump compliments Putin every opportunity he gets. They refused to accept that the Russia story was "fake."

"Where are the accolades for what Netanyahu actually said about Trump?" Bauer asked.

"Priebus talking about phony stories. Can anyone give me an example?" Lemon asked again.

"I don't want to speak for Reince Priebus," Bauer replied. "I don't know what stories he's talking about."

Lemon turned to Dennard who gave the example that Priebus and senior advisor Steve Bannon are fighting and that there is general White House in-fighting.

Lemon dismissed it saying that no one can confirm or deny the story is real or fake and that in-fighting happens in every White House without exception.

Ultimately, they concluded that Lemon should simply ask Priebus to come on the show and explain what he meant. Dennard maintained that Lemon did exactly what Priebus was talking about with regard to the media.

"They call it phony stories that they don't like," Democratic strategist Maria Cardona said. "Stories that paint Donald Trump like this person in the White House who is completely incapable of governing unfit and walking around the White House in a bathrobe."