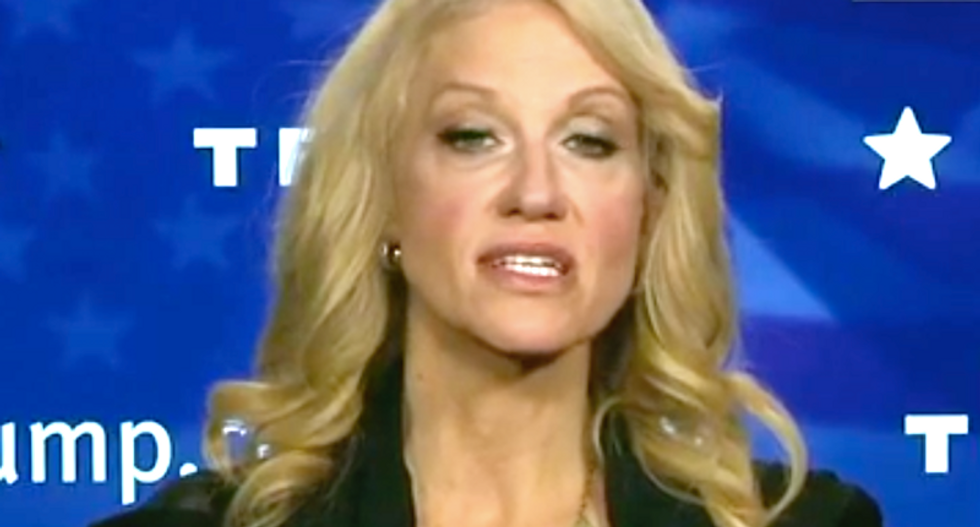 A source told CNN on Wednesday that Trump adviser Kellyanne Conway had been yanked from doing TV shows by the White House after a string of disastrous appearances severely damaged her credibility.

Although Conway had made several statements that caused the White House headaches -- including her embrace of what she described as "alternative facts" and her on-air plug for First Daughter Ivanka Trump's clothing line -- the final straw apparently came when Conway said that former National Security Adviser Michael Flynn had the "full confidence" of President Donald Trump just hours before he was fired.

A White House source tells CNN that Conway was pulled off the air for being "off message," while a separate source "close to" the White House claims that getting Conway off the air has helped the administration have "much more of a drama-free week."

Conway herself said that she planned on doing fewer TV appearances in the wake of her Flynn debacle, but this is the first time a report has claimed that she had been pulled off the air all together.

Several major cable news programs -- including CNN's State of the Union and MSNBC's Morning Joe -- have declined offers to have Conway appear over what they consider to be major credibility issues.

White House officials denied that the report was true after it was published by CNN.

"I've been invited on shows every day, including two Sunday shows. I'm trying to focus on other pieces of my portfolio," Conway told CNN in an update.

Dylan Byers, the CNN reporter who wrote the story, wrote on Twitter:

You do have to admire the White House press strategy… Don’t respond til after the story posts, then do something to imply it’s not true...
— Dylan Byers (@Dylan Byers) 1487791648.0