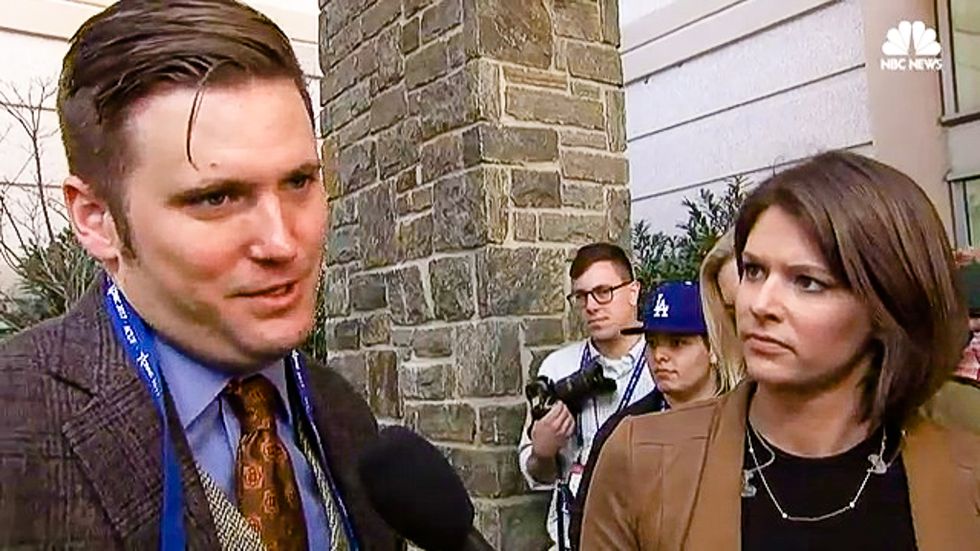 White supremacist Richard Spencer said on Thursday that he was kicked out of the Conservative Political Action Conference (CPAC) because conservatism was filled with "old ideas."

Although Spencer was popular among some attendees of CPAC, event organizers eventually revoked the neo-Nazi's credentials and escorted him from the building.

In an interview with MSNBC's Kasie Hunt, Spencer acknowledged that the private event had every right to revoke his credentials.

"They want to learn about ideas that just have so much meaning," Spencer continued. "I think everyone recognizes that there has to be identity politics in the world, that we -- white people define the United States -- that we're now experiencing an increasing minority status. And in terms of the wider culture and institution, we are, in fact, kind of a hated group. We are a group that people want to overcome, 'Oh, we need less white people in this institution or in this movie. We need a new non-white person or a non-white male to run for president.'"

Spencer later called the CPAC organizers "stupid" for comparing him to the Ku Klux Klan, and he predicted that young conservatives would flock to the white nationalist message without help from the event.

"All are these are just names that they call you, 'You're a Nazi or you're KKK or Southern Confederate,'" he said. "All of that is a way of stopping free speech."

"Tons of people here in terms of young people love the alt-right, they know who I am and they love my stuff. So, we're reaching them no matter what the CPAC leadership wants to do."