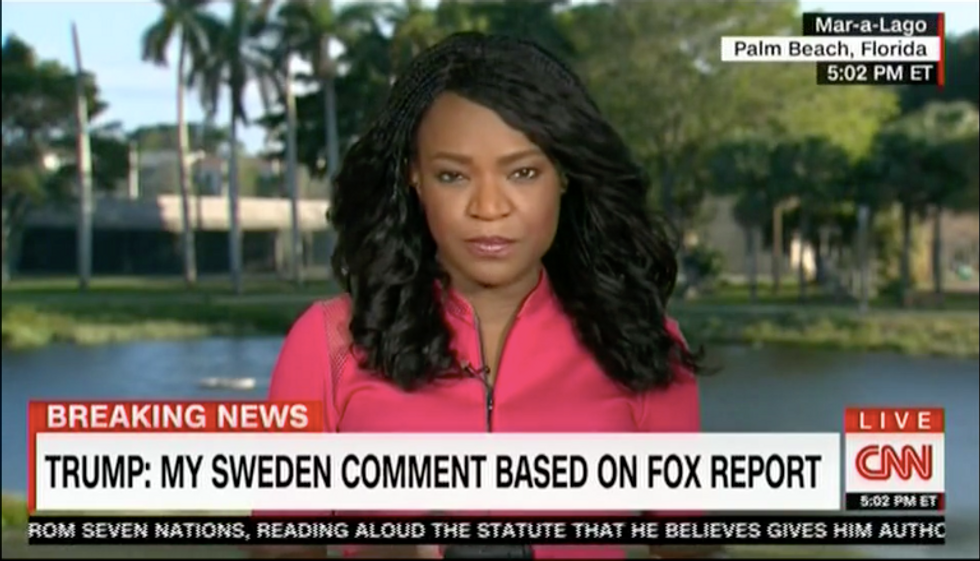 Sunday afternoon, CNN's Athena Jones expressed amazement that Pres. Donald Trump admitted the terror attack he made up on Saturday when he was at his rally in Melbourne, Florida was actually based on a segment on Fox News he only half-paid attention to.

"Now it's clear, at least, what the president was referring to," Athena Jones reported from Mar-a-Lago in Florida. "We know that he is an avid watcher of cable news, he particularly likes Fox."

"I've got to tell you, Pamela," Jones said, "this lack of precision, the president repeating things he hears -- something he's been doing since the very beginning of his campaign -- it's causing problems. It's already causing problems and it shows that words matter and that the whole world is watching and listening very carefully to what the president has to say."

Anchor Pamela Brown pointed out the irony of Trump making such a reckless claim the day after the called the U.S. media the "enemy of the American people."

Brown then turned to Atlantic political columnist Ron Brownstein, who said that this is a pattern we've seen from Trump before.

"It continues a pattern we've seen from the campaign and what's striking is how little the pattern has changed as president," Brownstein said, adding that the things presidents say matter, and that this president's words aren't vetted or filtered by any of the usual processes.

The Washington Examiner's Sarah Westwood said that the off-the-cuff speaking style that Trump's supporters love about his is what gets him into trouble again and again.