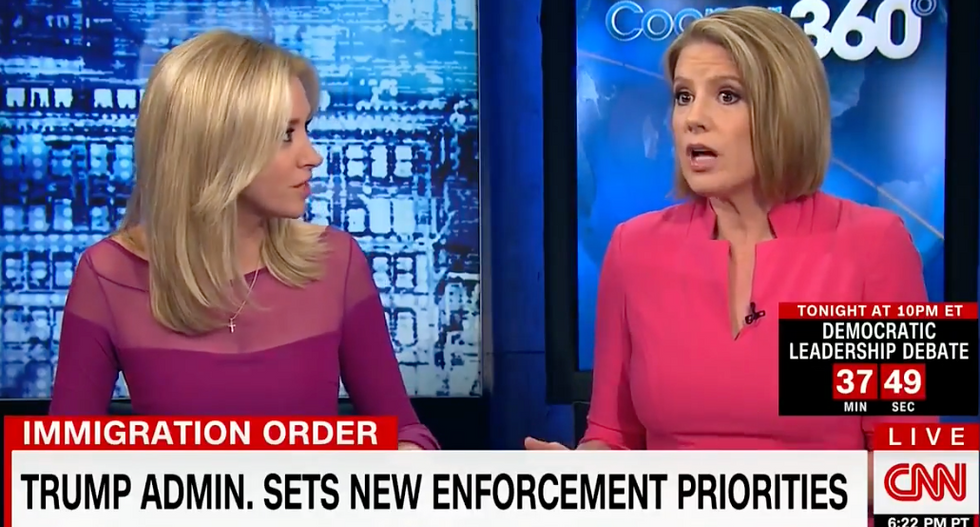 McEnany began by arguing that while most undocumented immigrants are hard working people, the immigration debate leaves out “another population of people,” namely, “victims of immigrant crimes.” McEnany specifically referred to the creation of a new office within Department of Homeland Security to work with victims of crimes committed by undocumented immigrants.

Political consultant Paul Begala pointed out that the “immigrant population has a lower crime rate than the American-born population,” arguing the administration should target violent felons in a similar manner as the Obama adminstration—which McEnany admitted was “very tough” on undocumented immigrants.

“What Mr. Trump is doing, and I think what your comment does, is use scare tactics to incite fear,” Begala charged.

“This thing, Kellyanne, that you keep doing, where you’re portraying undocumented immigrants as somehow being some menace to society, that we’re supposed to be living in fear of them somehow … it’s just demonizing this entire group of people over a few tragic, tragic incidents,” Powers said.

McEnany tried to defend herself, arguing that it’s not an “anomaly” when undocumented immigrants murder Americans. That’s when Powers nailed McEnany on her logical fallacy.

Powers: Look at it this way, do you support legal immigration?

McEnany: Of course I do!

Powers: Do you know there are some legal immigrants who killed people?

Powers: Okay, do you not care about the people who were killed?

McEnany countered that what she cares about are the people who are “not supposed to be here” and the Americans who “lose their right to life as guaranteed to them in the Constitution.”

“But they don’t lose their right to life because of undocumented immigrants,” Powers explained.