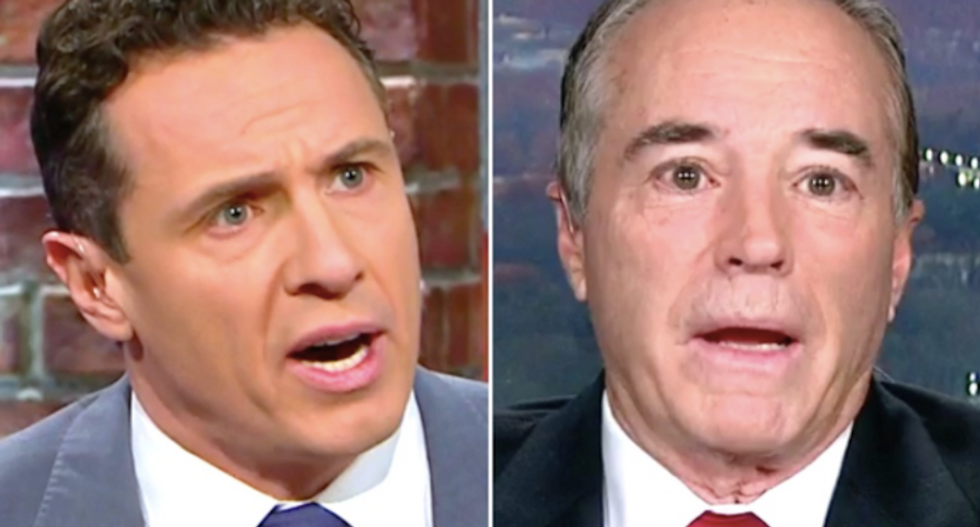 A Trump administration surrogate urged the media to "move on" past the Michael Flynn resignation on CNN, before many Americans were probably even aware the national security advisor had stepped down.

The retired general resigned shortly before 11 p.m. Monday over his possibly illegal dealings with Russian officials, and subsequent lies about them. Eight hours later, Rep. Chris Collins (R-NY) told CNN's Chris Cuomo the story had already faded too far into the past to remain relevant.

"I live in the world, we move on from here," Collins said. "I'm not going to be one nor hope others will dwell on the situation or pile on, to use another term, I think it's just time to move on and find the replacement."

Cuomo immediately pressed Collins to explain why top Republicans, such as House Speaker Paul Ryan and Senate Majority Leader Mitch McConnell, hadn't commented on Flynn's resignation, after the outgoing official admitted he had misled White House officials about his dealings with Russia.

"Well, (it's) Valentine's Day, and I guess they're having breakfasts with their wives," Collins said.

Cuomo explained to the GOP lawmaker that reporters would not likely heed his advice to "move on."

"Congressman, there is zero chance that we're going to move until the answers to the questions that present (themselves) at least get noticed from the White House," Cuomo said, as the lawmaker chuckled. "They wouldn't even take questions this morning. The White House hasn't taken questions from an open organization in days."

Cuomo asked Collins, the first congressman to endorse Trump, whether he believed anyone else in the White House knew what Flynn was up to, although he said it was virtually impossible that the national security advisor acted completely on his own.

"I believe that was Gen. Flynn's decision to have the conversation he had," Collins said. "As to who knew what, if somebody was intercepting that phone call and listening in, that's something that certainly has been suggested. But the details of it I certainly -- I have no knowledge of."

"They knew he discussed sanctions with his Russian counterpart at the same time that the Russian president mysteriously decided not to act the way it does every time in exchange with the United States," Cuomo said. "The United States kicked out some spies, closed down a couple of these safe houses that Russia had -- usually they respond. But not this time. You have no questions about who knew. You have no curiosity even though it deals with the heart of national security?"

Collins admitted he wasn't curious at all.

"Well, to be honest, I just live in a world where I always move forward," Collins said. "In a busy world, you don't dwell in the past."

"There is zero chance we are going to move on" on Flynn scandalhttps://t.co/mO4hu1iaoh