Al Franken scolds Gorsuch: 'I had a career in identifying absurdity and I know it when I see it' 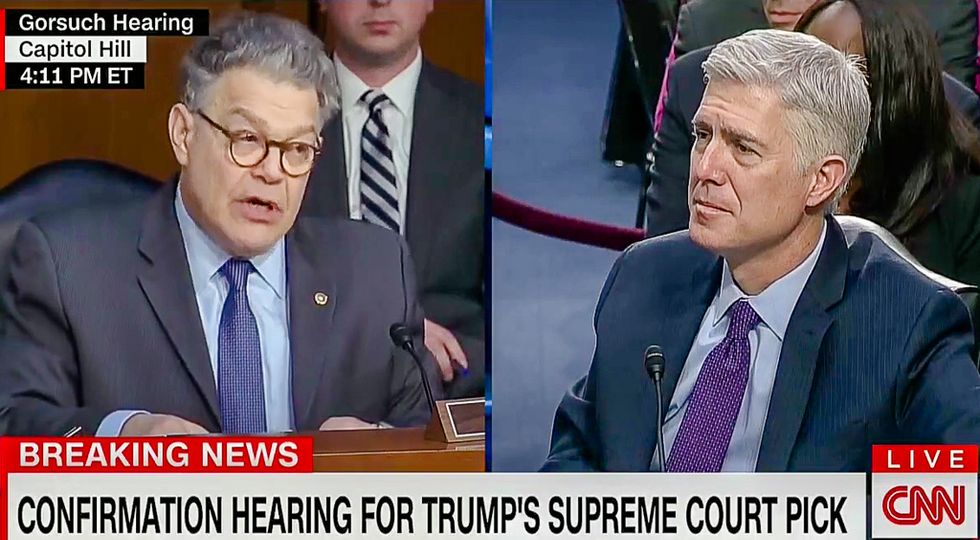 Sen. Al Franken (D-MN) called out Judge Neil Gorsuch, President Donald Trump's Supreme Court nominee, on Tuesday for what he said was an "absurd" ruling against a truck driver who was fired after nearly freezing due to malfunctioning equipment.

At a Senate confirmation hearing on Tuesday, Franken reminded Gorsuch that he had ruled to uphold the firing of a truck driver who abandoned his malfunctioning trailer because he was freezing while waiting for hours for his company to provide assistance.

Franken pointed out that Gorsuch had come to his conclusion using the "plain meaning rule" without considering another standard that said courts should depart from the rules when it created an "absurd result."

"It is absurd to say [the company] in its rights to fire him because he made the choice of possibly dying from freezing to death or cause other people to die possible by driving an unsafe vehicle," Franken said. "That's absurd. Now, I had a career in identifying absurdity. And I know it when I see it. And it makes me question your judgement."

Noting that Gorsuch had been "politically active" earlier in his career, Franken wondered why the judge was hesitant to defend Garland.

"I have a canon of ethics that precludes me from getting involved in any way shape or form in politics," Gorsuch opined. "I can't even attend a political caucus in my home state."

"I don't think you have to state your political views," Franken replied. "This is about how a Supreme Court justice who was nominated by the president of the United States -- this is, like, in the Constitution -- I think you're allowed to talk about what happened to the last guy who was nominated in your position."

Gorsuch demurred: "I appreciate the invitation but I know the other side has their views on this. And your side has your views of it. That by definition is politics."