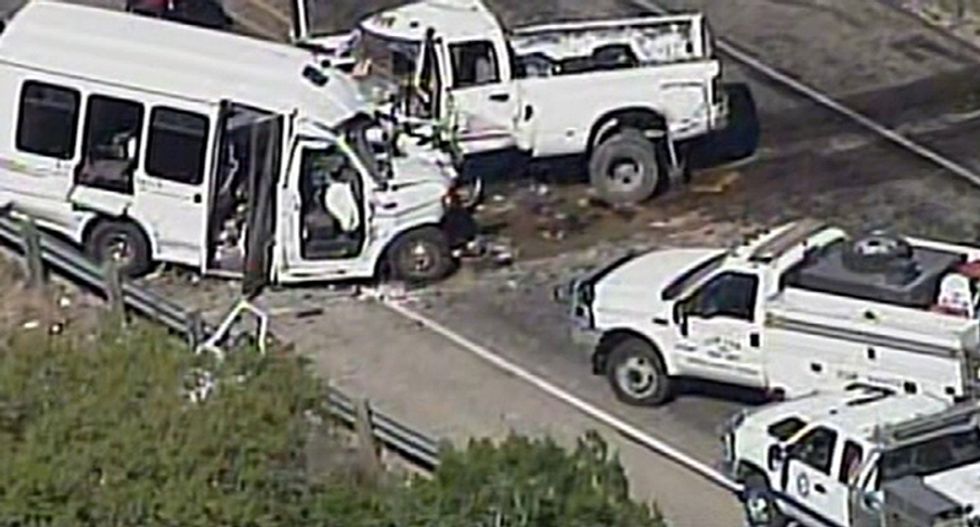 A still image of aerial video is shown of an accident scene involving a Texas church bus carrying senior citizens which crashed head-on with another vehicle about 80 miles (130 km) west of San Antonio, Texas, U.S., March 29, 2017. Courtesy WOAI/KABB/Handout via REUTERS

At least 12 people were killed and three others injured when a Texas church bus carrying senior citizens had a head-on collision with another vehicle on Wednesday, a Texas state trooper said.

The church bus had 14 people aboard when it collided with a pickup truck, with one person in that vehicle. The cause of the crash was still under investigation, said Sergeant Conrad Hein, a Texas Department of Public Safety spokesman.

Texas Governor Greg Abbott and his wife extended their condolences to the victims.

"We are saddened by the loss of life and our hearts go out to all those affected," he said in a statement.

First Baptist New Braunfels said on its Facebook page a group of senior adults affiliated with the church was involved in the accident. It said they were returning from a three-day retreat.