Auschwitz survivor issues powerful rebuke of ICE director: 'Don't forget, history is not on your side' 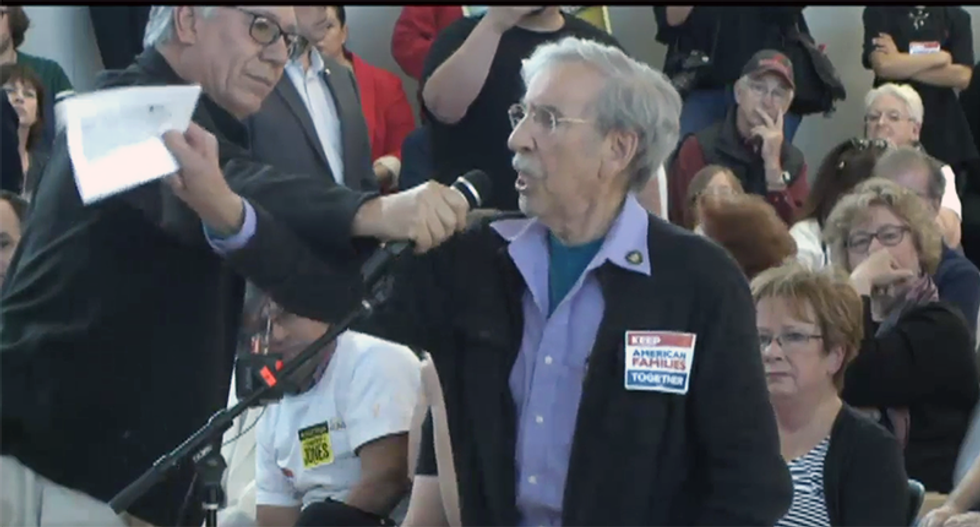 During an immigration forum in Sacramento, California Tuesday, a holocaust survivor had some strong words for Sacramento County Sheriff Scott Jones and acting Immigration and Customs Enforcement Director Thomas Homan.

According to CBS Sacramento, the man explained to Homan and Jones that as a boy in Poland he was "hauled off" for nothing more than simply being Jewish.

"For no other reason, I was picked up and separated from my family, who was exterminated in Auschwitz," he said. "And I am a survivor of Auschwitz and Dachau."

He said that he spent five years in concentration camps because the Nazi were picking on people. Picking on him.

"And you as the sheriff, who we elected as sheriff of this county—we did not elect you for sheriff of Washington, D.C. It’s about time you side with the people here," he said. "And when this gentleman [Homan] stands up there and says he doesn’t go after people, he should read today’s [Sacramento Bee]. Because in today’s Bee, the Supreme Court Justice of California objected to ICE coming in and taking people away from the courts. Don’t tell me that this is a lie."

He closed by telling Jones to not forget that history is not on his side.

Watch the full video below (his comments appear at the 26:50 mark)