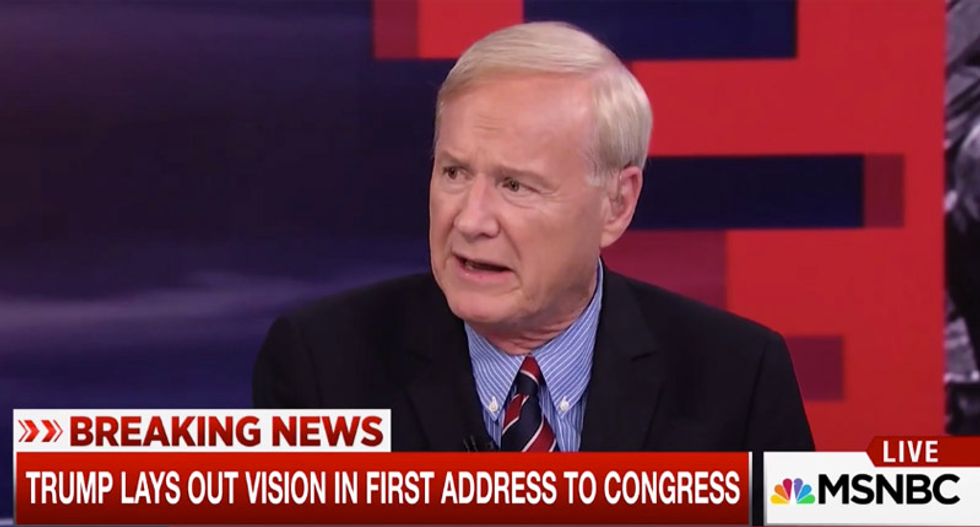 While there was an extraordinary attention paid the grieving widow of Navy Seal William "Ryan" Owens,  MSNBC host Chris Matthews was horrified at how Trump manipulated the moment without ever taking responsibility for Owen's death.

Responding to co-host Rachel Maddow discussing Trump blaming the failed mission in Yemen on the military and former President Obama, Matthews went off.

"This really offends me, the fact that he said that," Matthews agreed. "War is guys shooting at each other, trying to kill each other. You go into battle and firefight and anything can happen and casualties are part of war. The Europeans knew that way before we knew that. War means casualties."

"And to dick around about this thing, the President of the United States is saying, 'It wasn't my job,'" Matthews continued. "The buck does stop there and it is the Commander-in-Chief. And I go back to the Bay of Pigs. Kennedy said, 'It was me, I'm the officer in charge.' You have to say that. You can't write the letter to the widow and say 'it wasn't me.'"

"Let's figure out what went wrong here," he stated. "These are difficult, dangerous missions and people get killed and the idea that the president has to argue with somebody about whose fault it is is below the office."