Chuck Todd: GOP alliances 'dramatically breaking down' despite being majority in Congress 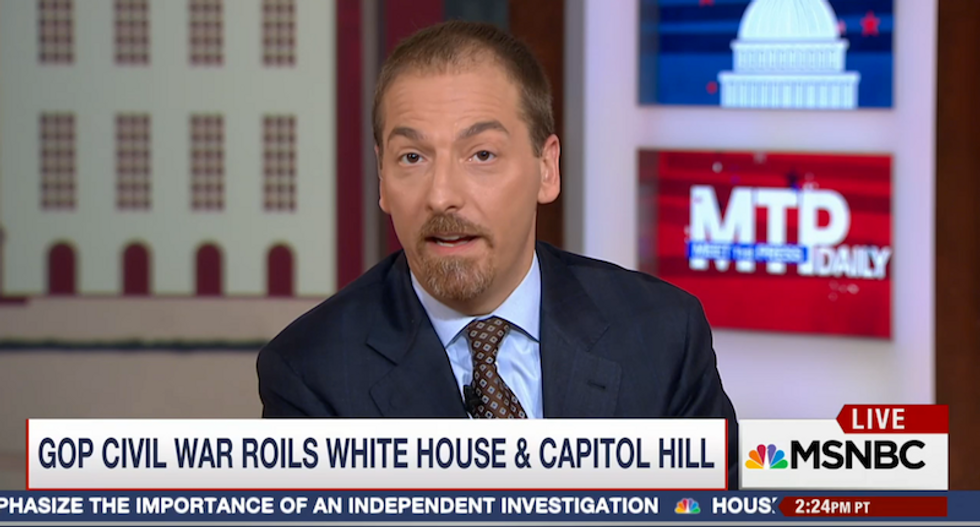 "There's fire in the Republican party right now," Todd said. "In addition to the Russian cloud bogging down everything, the White House agenda is a mess and party alliances are dramatically breaking down."

Todd pointed out President Trump's seeming declaration of war on members of his own party for killing the GOP healthcare plan, "threatening to fight [Republican] hardliners ... in the 2018 mid-terms." Trump singled out three Republican senators in particular, in the following tweet.

If @RepMarkMeadows, @Jim_Jordan and @Raul_Labrador would get on board we would have both great healthcare and massive tax cuts & reform.
— Donald J. Trump (@Donald J. Trump) 1490908844.0

Todd noted, "hardliners responded today with open defiance." He then played a clip of Rep. Justin Amash (R-MI) being questioned by reporters about whether Trump's tweets were "an actual negotiating tactic" and whether it's constructive.

"I mean, it's constructive in fifth grade," Amash replied. And after House Speaker Paul Ryan (R-WI) warned Freedom Caucus conservatives on Thursday to not allow the president to "strike a deal with Democrats," Sen. Bob Corker (R-TN) slammed Ryan on Twitter.

He wrote the following:

We have come a long way in our country when the speaker of one party urges a president NOT to work with the other party to solve a problem.
— Senator Bob Corker (@Senator Bob Corker) 1490878500.0

"So, some moderate Republicans in the House have now decided to freeze out conservatives," said Todd.