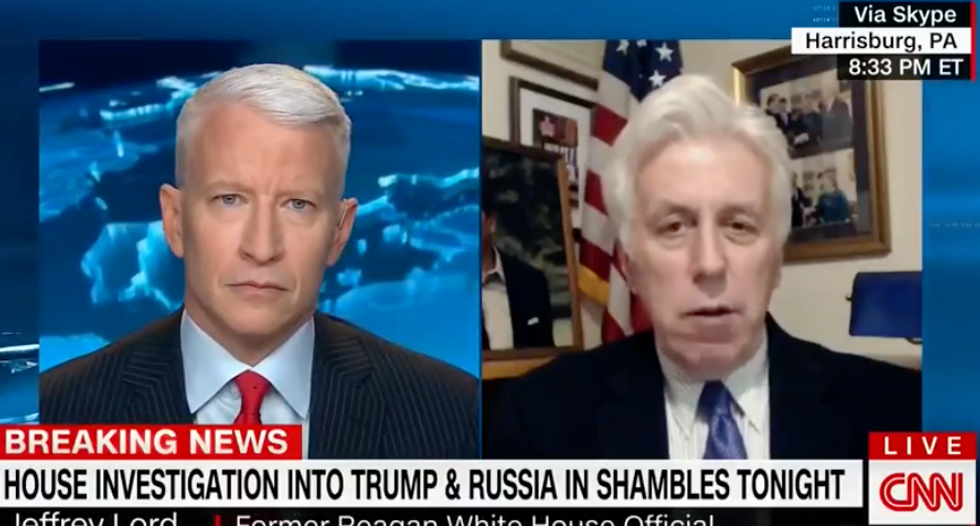 CNN’s Anderson Cooper on Wednesday was incredulous over Jeffrey Lord’s claim that Rep. Adam Schiff is “colluding” with House Minority Leader Nancy Pelosi, prompting the CNN host to inform his guest that Pelosi is not the subject of any ongoing investigation.

“Is Adam Schiff colluding with Nancy Pelosi?” Lord asked during a panel on “AC 360.”

“If we’re going to go down this road … then we need to go down the road in full,” he continued. “I just think we should get all of this out, every last bit of this out.”

“But Jeffrey, the committee is not investigating Nancy Pelosi,” Cooper informed Lord.

“Maybe they should!” Lord shot back, asking, “did Nancy Pelosi know ahead of time what Adam Schiff was saying?”

“Well you can play that rhetorical game,” Cooper replied, before Lord cut him off to say theH House Intelligence Committee needs to “play fair” with both sides.

“Again, Nancy Pelosi is not the one being investigated, the White House is,” Cooper explained.

Lord tried to argue that Pelosi is not being investigated, but is the investigator, prompting Cooper to point out that the House Minority Leader is not on the committee and is not involved with the investigation.