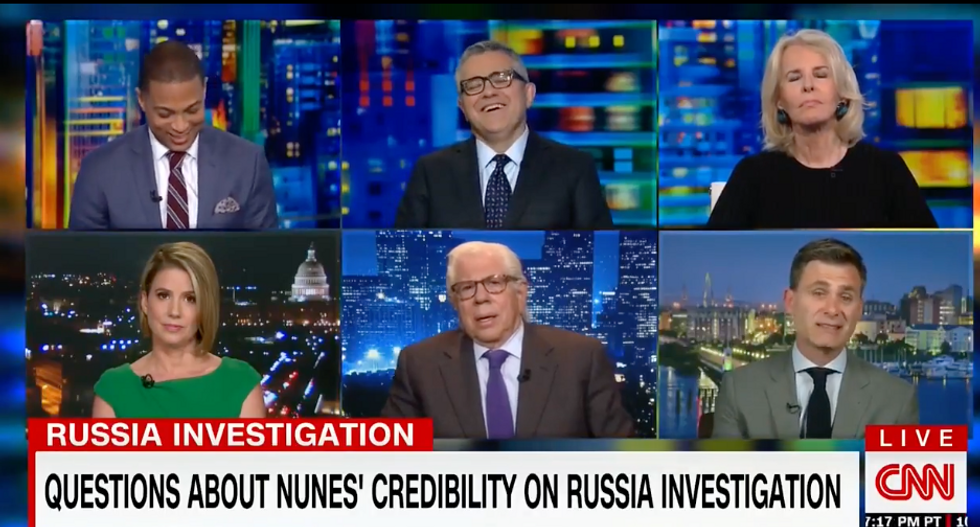 A CNN panel on Wednesday laughed at loud at a conservative guest parroting talking points that had nothing to do with the question at hand.

Discussing Devin Nunes’ erratic behavior with regards to the House Intelligence Committee, Don Lemon asked pundit Andre Bauer if the chairman has “any credibility left” to run the investigation into Donald Trump and his associates.

Bauer insisted “he’s got credibility left,” arguing “not everybody in America is as fixated as ya’ll are on all this Russian stuff.”

“They’re not paying attention to this stuff,” Bauer continued. “I know we’re fixated on it in the media, but they’re not.”

Bauer’s cavalier to a major investigation into a foreign power’s interference in the U.S. elections prompted Lemon and CNN senior legal analyst Jeffrey Toobin to literally bust out laughing.

“I don’t know what that has to do with the truth of an investigation,” Lemon said of Bauer’s insistence that average Americans don’t care about “this stuff.”

“When you’re doing talking points, it should have some relationship to what you were asked,” Toobin explained to Bauer.

Later in the segment, famed journalist Carl Bernstein smacked down Bauer’s assertion that nobody cares about the ongoing investigation into Russian interference in the 2016 election.

“Polls are not what truth is about,” Bernstein said.