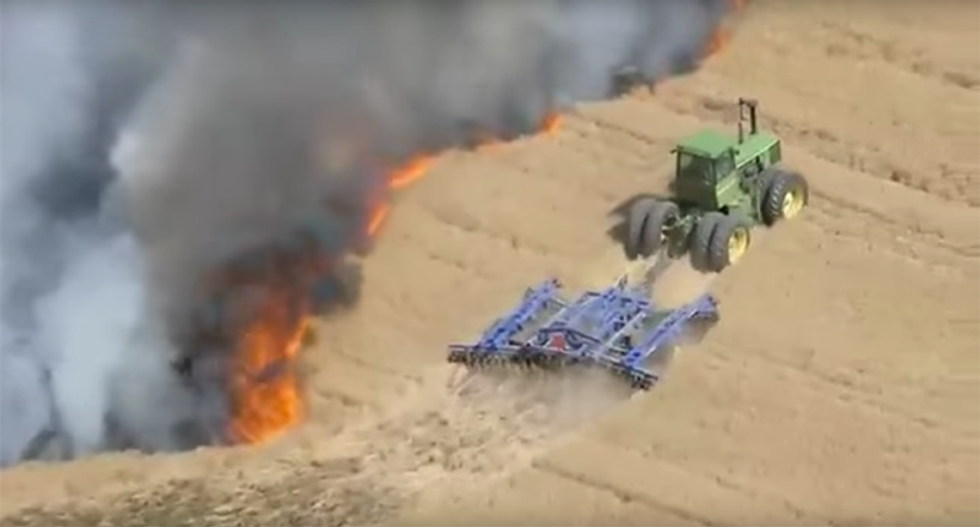 A wind-driven wildfire erupted on the eastern plains of Colorado on Monday, scorching 30,000 acres of grassland, prompting the temporary evacuation of a small farming town and destroying at least three homes, emergency officials said.

The fire erupted around midday east of the town of Sterling and quickly grew out of control as gale-force winds fanned the flames, said Marilee Johnson, spokeswoman for the Logan County Office of Emergency Management.

Mandatory evacuations were lifted for the town of Haxtun late in the afternoon but some 900 homes remain threatened and those residents have been warned to prepare to flee should shifting winds drive flames their way, she said.

The 30,000-acre fire was 50 percent contained, the Logan County Office of Emergency Management said in a statement.

No injuries have been reported but three homes and a fourth structure were burned to the ground. The cause of the fire was unknown.

Footage from a Denver television station showed rows of hay bales in the agricultural area consumed by flames. More than 70 firefighters from 13 agencies were battling the blaze, emergency managers said.

The Colorado Department of Public Health and Environment issued an air quality alert due to smoke and dust kicked up by the winds, warning residents to stay indoors.

"This is especially true for those with heart disease, respiratory illnesses, the very young and the elderly," the health department said in a statement.

Interstate 76 was temporarily closed due to smoke and blowing dust but some county roads remained closed by nightfall, the state emergency operations center said.

Schools in the towns of Caliche, Haxtun and Fleming were evacuated as winds whipped up the grass fire in the afternoon, the state office of emergency management said in a statement posted on its website.

The National Weather Service issued high wind warnings or advisories for much of Colorado as a cold front blew across the state on Monday, with blowing snow making for hazardous driving conditions in the Colorado mountains.

“Expect an additional 3 to 5 inches of snow combined with west winds of 35 to 50 mph and gusts to 70 mph,” the weather service said in a statement.

High winds also buffeted the Denver metropolitan area, causing power outages to nearly 600 businesses and residences for a time on Monday, the utility company said on its online outage report.

Former Gov. Eric Greitens (R-MO) served in the Navy and one of his fellow servicemembers has published a video begging the Republican to get out of the Missouri Senate race.

In a video that is quickly going viral, Navy man Ken Harbaugh, who served for nine years during some of Greitens' year, called the Senate candidate a "broken man."

Uvalde officer asked permission to shoot gunman outside school but got no answer, report finds

An Uvalde police officer asked for a supervisor’s permission to shoot the gunman who would soon kill 21 people at Robb Elementary School in May before he entered the building, but the supervisor did not hear the request or responded too late, according to a report released Wednesday evaluating the law enforcement response to the shooting.

The request from the Uvalde officer, who was outside the school, about a minute before the gunman entered Robb Elementary had not been previously reported. The officer was reported to have been afraid of possibly shooting children while attempting to take out the gunman, according to the report released Wednesday by the Advanced Law Enforcement Rapid Response Training Center in San Marcos.