Don Lemon nails Trump's mistake: The Russia story is only big again because of his wiretap allegations 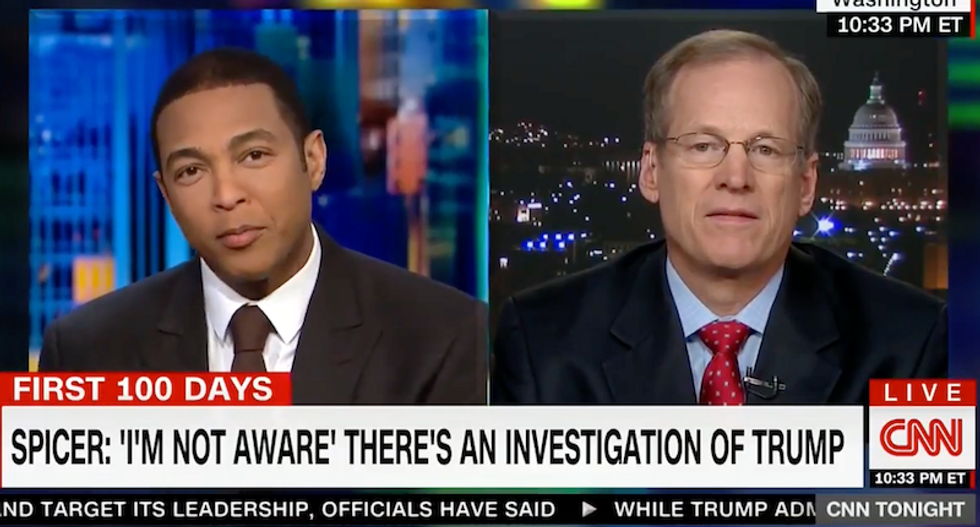 CNN's Don Lemon hosted a panel on Thursday night to discuss Donald Trump's wiretap claims and his ties to Russia, agreeing that there are still more questions than answers.

"There's drip, drip, drip, here, right? Everyone has said nothing has been established," said Lemon. "But can the White House continue to say there's no 'there' there with this?"

Political commentator David Gergen said, "It really is sort of interesting." He noted, "We know so little at this point that we shouldn't get too deeply in the weeds about the computers talking to each other — the servers talking with each other."

Later in the segment, former senior advisor to the Trump campaign, Jack Kingston, claimed Trump's critics are "missing bigger stuff" in their "eagerness to find something that this administration has done nefarious ... You know, that's fine, that's what opposition parties do."

Lemon replied, laughing, "You know the old saying, 'no news is good news?' There's a saying that I say, it's 'good news is no news.' We would do stories about birthday parties and squirrels on skis, but that's just not how this works."

He continued, "If there is a federal investigation, which our reporters found out, of course that's what we're going to cover. And had this president not tweeted out that the former president wiretapped him in relation to Russia, the story may not be to the magnitude that it is now. How can you disagree with that?"