Draining the swamp: A guide for outsiders and career politicians

What do Ron Paul, Nancy Pelosi and President Donald Trump have in common? They’ve all promised to “drain the swamp” of Washington politics.

These ambitious “hydraulic engineers” rely on a phrase that is deeply mired in our political discourse. The metaphor gets its clout from the notion that Washington was built in an actual physical swamp, whose foul landscape has somehow nourished rotten politics.

The assumption is just plain wrong: Washington was never a swamp, as I’ve discovered in exploring its first two centuries.

George Washington knew exactly what he was doing in early 1791 when he led the three-member commission that Congress had authorized to pick the site for the nation’s capital. There was never much doubt that the new federal district and city would be near the head of navigation on the Potomac River, adjacent to the thriving port town of Georgetown and well away from the squishy margins of Chesapeake Bay. Washington knew the region intimately as a nearby landowner and resident, and the site for Washington looked much like his home at Mount Vernon – a rolling riverside terrain of old tobacco fields.

Like many other early American cities such as Philadelphia and Cincinnati, Washington was built on a firm and dry riverbank. The land sloped steadily upward away from the Potomac between Rock Creek and the Anacostia River, then called the Eastern Branch of the Potomac.

The spurs of land that extended northward from the main river were immediately obvious to Pierre L’Enfant, the French immigrant who mapped out the streets and squares for the new city. He picked one high point for the presidential mansion and one for the houses of Congress. After all, it’s Capitol Hill, originally called Jenkins Hill, not Capitol Slough.

Flowing between the Capitol and White House was Tiber Creek, a perfectly respectable watercourse whose route took it southward, roughly along North Capitol Avenue, skirted the future Union Station Plaza and turned west where Constitution Avenue now runs. The western part of the creek was turned into the Washington City Canal in 1815. The canal was pretty unpleasant by the 1840s, but that was because of inadequate sewers, not because of inherent swampiness. 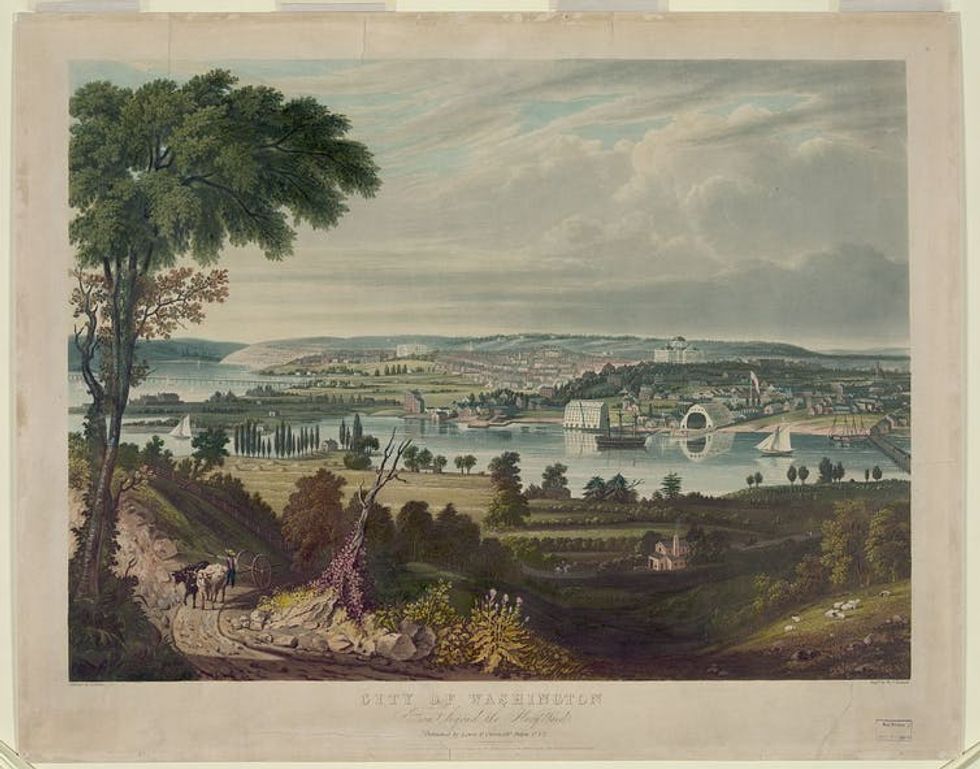 ‘City of Washington from Beyond the Navy Yard’

Pictorial panoramas of the city proliferated during the 19th century as ways to instill national pride in Washington, and are one of the best sources for understanding early Washington. Leaf through the images in the Library of Congress and you’ll see a dry landscape with buildings that would not have survived to the present had their foundations been sunk in muck. The Smithsonian Castle, for example, has been standing straight since the late 1840s. 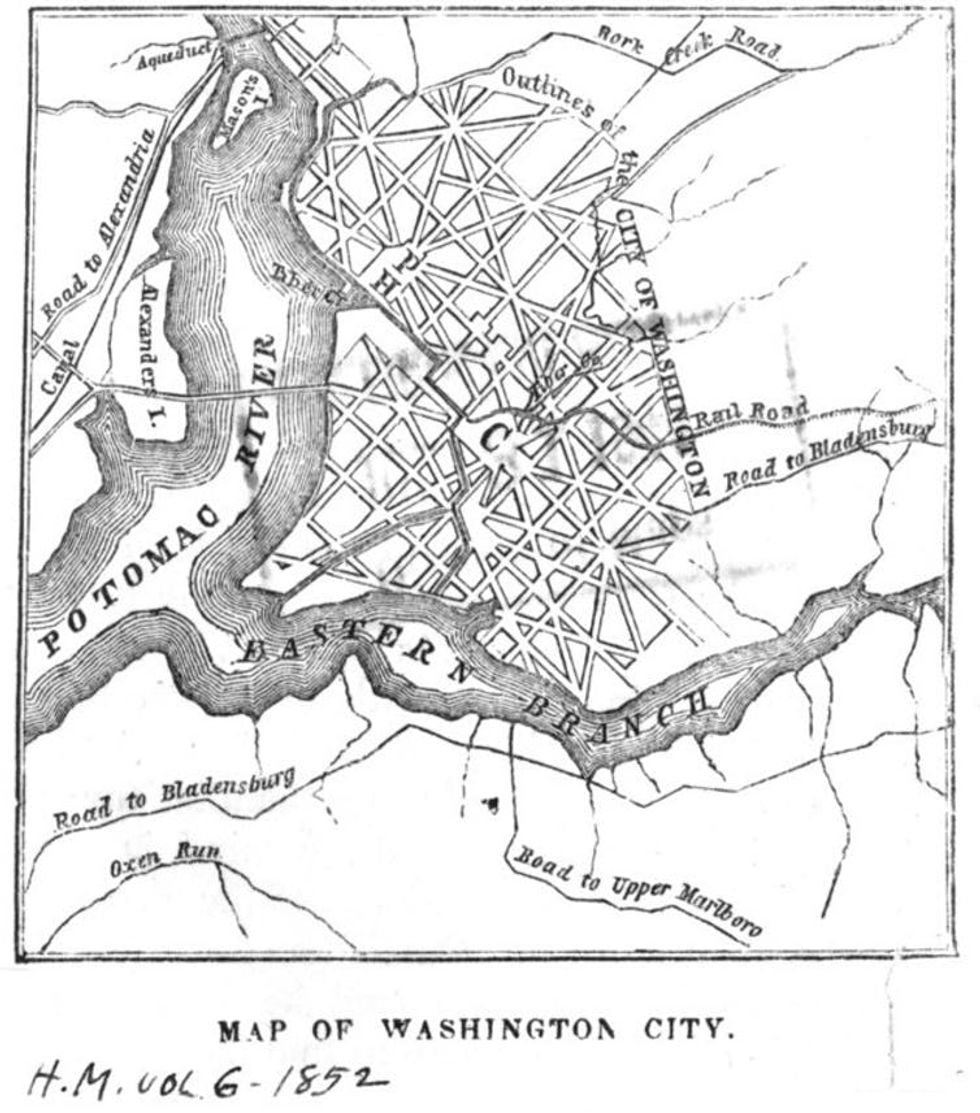 Library of Congress, CC BY

Early maps show the same. In 1826, Anne Royall, possibly the first female professional journalist in the United States and author of “Sketches of History, Life and Manners, in the United States,” described “the elevated site of the city; its undulating surface, covered with very handsome buildings.” She continued her inventory of the city without mentioning a single swamp and concluded, perhaps with too much enthusiasm, that “it is not in the power of imagination to conceive a scene so replete with every species of beauty.”

Visitors, especially from Britain, enjoyed needling the new city, but it was the manners and pretensions of its inhabitants that were the lightning rod for criticism, not the landscape. In 1830, English visitor Frances Trollope, usually happy to criticism anything American, wrote: “I was delighted with the whole aspect of Washington, light, cheerful, and airy; it reminded me of our fashionable watering-places.”

The truly muddiest episode in Washington’s development came in the mid-19th century. After the Civil War, decades of farming in the Potomac River hinterland led to erosion that sent masses of silt downriver. As the Potomac slowed below its last rapids – where the river entered the District of Columbia – the silt precipitated into massive mudflats on the city side of the river.

In the 1880s and 1890s, the Corps of Engineers began to reshape the flats into the Reflecting Pool, Tidal Basin and hundreds of acres of adjacent park lands for presidential memorials and blossoming cherry trees, creating a riverfront park that nobody today would associate with the word “swamp.”

None of this is to say that the capital lived up to George Washington’s vision of a comprehensive metropolis with commerce and culture to rival or surpass Philadelphia. The Erie Canal with its boost to New York certainly put a crimp on Washington’s ambitions, but it was the aggressive growth of Baltimore that made Washington an also-ran in Mid-Atlantic commerce. English commentator James Bryce wrote in “The American Commonwealth” that the United States was the only great country without a true capital, but that was a dig at New York as much as at Washington.

It might be time to retire the metaphor and quit trying to pull the plug on Washington.

Politicians who have spent any time in Washington (hey, Nancy Pelosi) should know better. After all, the city is filled with neighborhoods with names like Friendship Heights, Mount Pleasant, Columbia Heights, Crestwood, Washington Highlands and “fine view” (Kalorama).

Having summered in Washington, I’m not writing to defend the climate. But a steam bath does not make a swamp. I don’t expect the facts of Washington’s historical geography will fully undercut a catchy bipartisan slogan, but take it for what it is – a facile phrase without an anchor in the city’s history.