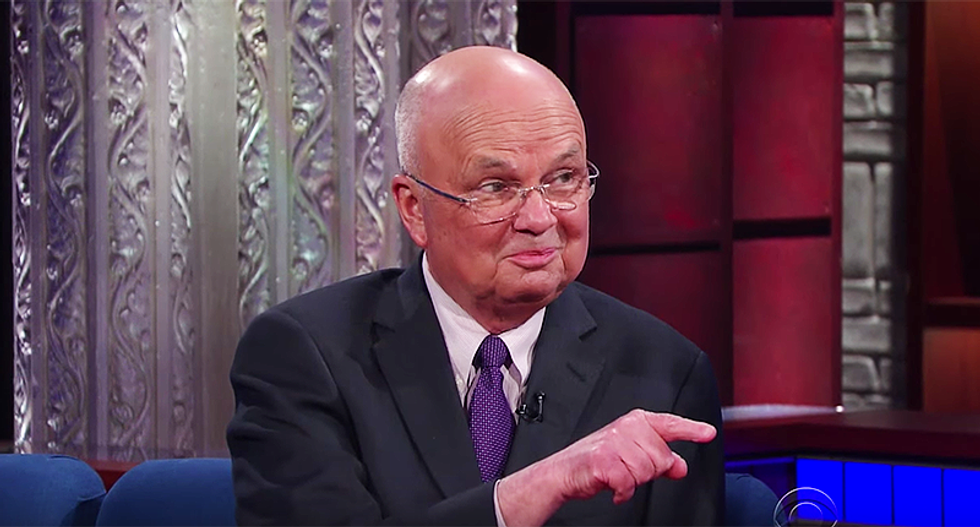 According to a massive document dump from WikiLeaks, the CIA is spying on Americans through malware on cell phones and Samsung televisions. Former CIA director Michael Hayden told Stephen Colbert on Tuesday's "Late Show" that the claim is false.

"Look, I can tell you that these tools would not be used against an American," he said, noting "there are some bad people in the world who have Samsung TVs...So, the NSA develops tools. The CIA develops tools that we can use."

“How is that not possible?” Colbert asked Hayden. He noted that the government has already worked to wiretap those it deems a threat, including those with Russian ties. “Why wouldn’t the president do this?” Colbert asked.

Hayden explained that in the 1970s, the U.S. took the power to wiretap "out of the hands of the president and we put it in the hands of the federal court system,” Hayden explained. Hayden said federal investigators would have been required to demonstrate President Donald Trump was an agent of a foreign power or otherwise engaged in criminal activity before a court issued a wiretap warrant.

Trump alleged Saturday that former President Barack Obama ordered a wiretap on him at Trump Tower. Multiple sources have said that Trump is wrong and that there was no wiretap on Trump. Colbert asked what many in the media have asked former intelligence operatives, “Can the president just find out for himself that this happened?”

“That’s what I wondered,” Hayden admitted. “On Saturday morning, he seemed to have forgotten that he was President of the United States,” he said as the audience laughed and applauded. Colbert joked that every morning he hopes Trump's presidency was a horrible dream. Hayden explained that Trump could very easily picked up the phone to call FBI director James Comey or talked to the former Director of National Intelligence James Clapper.

“He did not choose to do that," Hayden continued. "He decided to go ahead and tweet out the accusation as if it were fact."

Colbert asked if the president of the United States should be tweeting things like this, and Hayden said unequivocally Trump should not.

“If it were true, that previous President Obama had used, through some governmental mechanism, a plumber squad even, something just criminal--" Colbert began.

“Which is why we took the power away from the president in the 1970’s,” Hayden cut in.

“Because Nixon did this,” Colbert noted. "If this had happened, even because Trump was suspected of colluding with the Russians, would he have somehow breached national security ... would he have released classified information by doing that tweet?"

Hayden said it was a "weird circumstance" but said that the classification system is run by the president himself. So, if Trump tweets classified information it is then declared declassified. So, Trump could have been tweeting classified information and declassifying it. "Remember back in the Nixon era when he said, 'When the president does it, it's not illegal?' This is one instance where that is right."

Colbert wants Trump to tweet things that are more fun like Area 51 and who really killed Tupac. He asked Hayden if he knew things that Colbert would be fascinated to hear.

"Yes," Hayden smiled, noting that he can keep a secret.