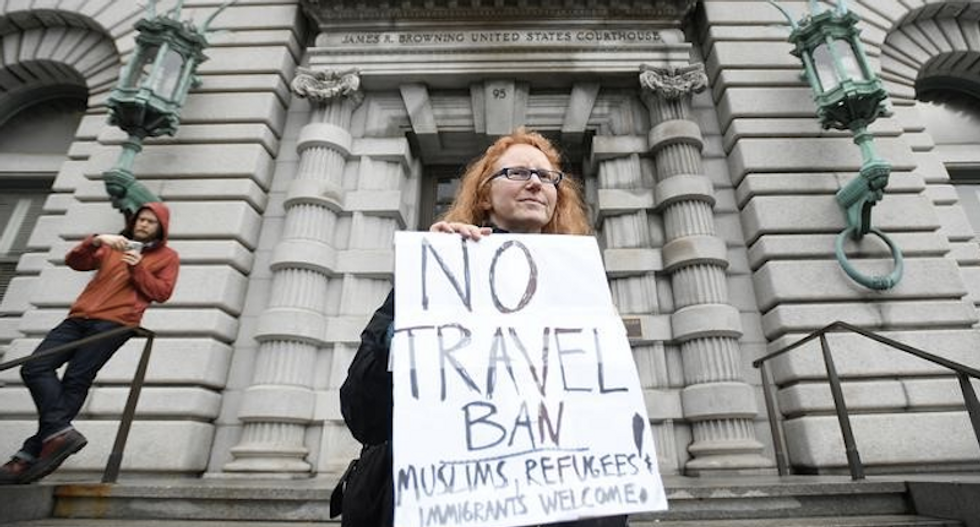 A federal judge in Wisconsin dealt the first legal blow to President Donald Trump's revised travel ban on Friday, barring enforcement of the policy to deny U.S. entry to the wife and child of a Syrian refugee already granted asylum in the United States.

The temporary restraining order, granted by U.S. District Judge William Conley in Madison, applies only to the family of the Syrian refugee, who brought the case anonymously to protect the identities of his wife and daughter, still living in the war-torn Syrian city of Aleppo.

But it represents the first of several challenges brought against Trump's newly amended executive order, issued on March 6 and due to go into effect on March 16, to draw a court ruling in opposition to its enforcement.

Conley, chief judge of the federal court in Wisconsin's western district and an appointee of former President Barack Obama, concluded the plaintiff "has presented some likelihood of success on the merits" of his case and that his family faces "significant risk of irreparable harm" if forced to remain in Syria.

The plaintiff, a Sunni Muslim, fled Syria to the United States in 2014 to "escape near-certain death" at the hands of sectarian military forces fighting the Syrian government in Aleppo, according to his lawsuit.

He subsequently obtained asylum for his wife and their only surviving child, a daughter, and their application had cleared the security vetting process and was headed for final processing when it was halted by Trump's original travel ban on Jan. 27.

That executive order sought to ban admission to the United States of citizens from seven Muslim-majority countries - Iran, Libya, Somalia, Sudan, Syria, Yemen and Iraq - for 120 days and to suspend entry of all refugees indefinitely.

The original travel ban, which caused widespread chaos and protests at airports when first implemented, was rescinded after the state of Washington won a nationwide federal court order blocking further enforcement of the policy.

The modified executive order reduced the number of excluded counties - removing Iraq from the list - and lifted the indefinite refugee travel ban for Syrians. But opponents from several states have gone to court seeking to halt its implementation as well.

"The court appreciates that there may be important differences between the original executive order, and the revised executive order," Conley wrote in his decision. "As the order applies to the plaintiff here, however, the court finds his claims have at least some chance of prevailing for the reasons articulated by other courts."

In a related development on Friday, the federal judge in Seattle who imposed a nationwide injunction on enforcement of the original travel ban refused a request to apply that order to the revised policy, saying that lawyers from states opposed to the measure needed to file more extensive court papers.

(Reporting and writing by Steve Gorman in Los Angeles; Additional reporting by Mica Rosenberg in New York and Sharon Bernstein in Sacramento, California; Editing by Sandra Maler and Mary Milliken)