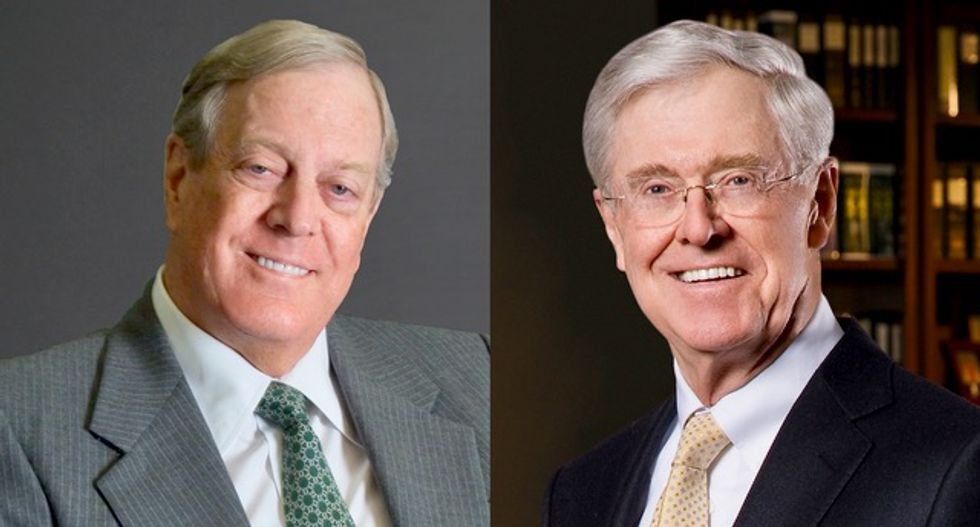 David and Charles Koch in a combination image. REUTERS/Handout

Republicans considering whether or not to back U.S. President Donald Trump's health care reforms in a crucial House of Representatives vote this week face a painful choice.

If they vote against, they could face the wrath of a vengeful and combative president. If they vote for it, they risk retribution from the billionaire brothers Charles and David Koch and other powerful right-wing players whose money can be pivotal in re-election races.

As Trump faces the most formidable, high-stakes negotiation of his presidency, the fierce battle in the U.S. Congress over his plan to replace Obamacare is a test of whether Republicans will trust him with their political futures at the risk of alienating deep-pocketed conservative advocacy groups.

As Trump and leaders in the House round up support for the bill ahead of a planned Thursday vote, some groups are threatening to retaliate against those who do support it, including the Club for Growth, the Heritage Foundation's political arm, and Americans for Prosperity, which is part of the expansive political pressure network established by the Koch brothers.

All three groups are “keying” the vote, which means it will be a factor in determining whether the groups deem a lawmaker to be sufficiently conservative. That opens up the possibility that some Republicans who vote in favor of the bill could face a primary challenge in next year’s congressional elections and may not be able to count on help from the Kochs and others.

Trump himself warned House Republicans in a meeting on Tuesday that their seats will be at risk next year if they do not support his health care bill, which would modify but not eliminate Obamacare, formally known as the Affordable Care Act, Democratic former President Barack Obama's signature health care legislation passed in 2010.

“He warned us that there are consequences if we don’t come together for us as a party and also for individuals,” Representative Richard Hudson of North Carolina said after the meeting. “He wasn’t threatening in any way. He was just giving us a pretty clear warning.”

Trump also told Representative Mark Meadows of North Carolina, an outspoken critic of the bill, that he was "coming after" him, according to people in the meeting. Meadows later said the president was joking.

Some Conservatives believe the bill does not go far enough in dismantling Obamacare and have not been satisfied by the White House’s attempts to mollify them. NBC News reported on Tuesday that 26 House Republicans oppose the bill, which would leave House Speaker Paul Ryan short of the 216 votes he needs. No Democrat is expected to support the bill.

The conflict has created an odd dynamic: Trump, who ran as an “outsider” candidate siding with the Republican political establishment against the hard-line conservatives who were some of his most ardent supporters.

At the same time, Trump has never been a favorite of libertarian conservatives such as the Kochs, or of groups such as the Club for Growth, because, among other things, he has never taken a strong stand on reining in federal spending. They opposed him during the Republican presidential campaign.

For them, the health care vote is a test of their continued relevance in a party seized by Trump.

The Koch network spent an estimated $250 million on last year’s election. The Koch-run Americans for Prosperity, which has chapters in more than 30 states and boasts that it can deploy 3.2 million citizen activists, spent almost $14 million on the 2016 elections, according to federal records. Freedom Partners, another Koch entity which largely targeted Democrats with attack ads, spent $30 million.

Tim Phillips, president of Americans for Prosperity, would not say directly that Republicans who support the bill will face consequences next year, but noted, “Members of Congress know how serious we take a vote like this.”

James Davis, a spokesman for Freedom Partners, said “network organizations will stand with principled lawmakers who will oppose the House health care proposal.”

Davis said the Koch network would spend between $300 million and $400 million ahead of the 2018 elections.

Last year, Americans for Prosperity and the Club for Growth targeted an incumbent House Republican, then-Representative Renee Ellmers of North Carolina, for being too close with House leadership and not holding the line on government spending. Ellmers lost in a primary fight.

House Republicans have been nervous about primary challenges since 2014 when Eric Cantor, then the majority leader, lost to a little-known conservative named David Brat.

“Groups such as the Kochs have been an important part of a coalition of outside Republican money,” said Nathan Gonzales, a congressional political analyst in Washington. “If that coalition falters, that could contribute to Democratic gains.”

But several lawmakers interviewed by Reuters were dismissive of the opposition by conservative groups.

“For me, this health care bill is an absolute no-brainer,” said Representative Devin Nunes of California, a close Trump ally. “Any conservative group who opposes it, I don’t even understand how they can categorize themselves as being a conservative group.”

The bill’s supporters have argued that voters are more likely to punish Republicans who do not act to replace Obamacare when given the chance. “If it fails there are going to be a lot of people who are looking for work in 2018,” said Representative Mike Conaway of Texas.

The political implications of the bill, though, remain largely unclear.

Even if it passes the House, the bill faces a difficult path in the Senate, where several conservatives have declared their opposition. Veteran House members recall in 2009, when then-Speaker Nancy Pelosi forced a vote on a bill that would cap carbon emissions. The bill did not pass the Senate, and many Democrats from coal states lost their seats in the 2010 elections for their votes.