'He said it was a fact': Wolf Blitzer refuses to let GOP rep dance around Trump's unfounded wiretap claim 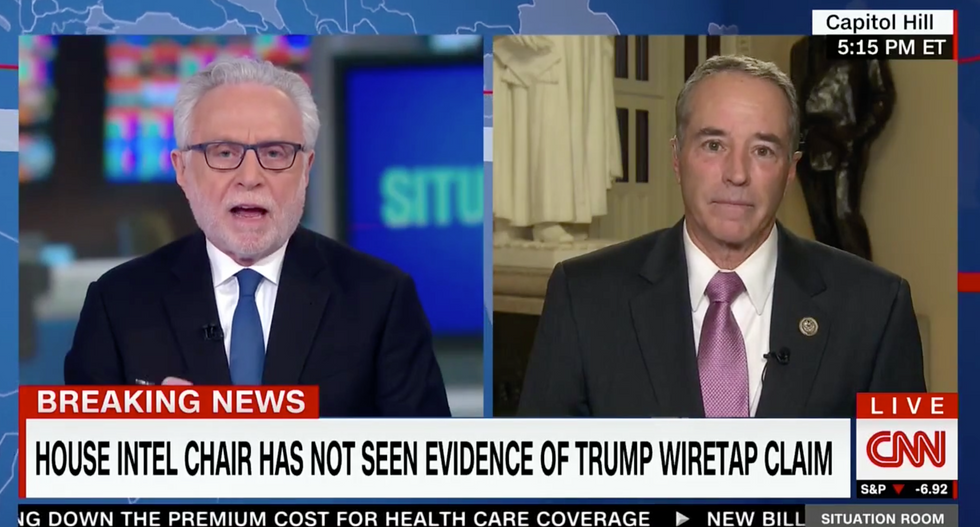 “President Trump called it a ‘fact’—he said it was a ‘fact’—that President Barack Obama ordered the illegal wiretap of his phones last year at Trump Tower in New York City,” Blitzer told Collins, asking if he’s away of “any evidence” to back up the president’s claim.

Collins said he wasn’t “privy” to any specific evidence to support Trump’s wiretap tweet, but added, “if we’re going to investigate the Russian issue related to the campaign, there’s nothing wrong” with investigating Trump’s claim as well.

Blitzer pointed out that the Republican chairmen of the House and Senate, respectively, have said the same thing, that there’s “no evidence” Obama had Trump’s wires tapped. “Does that concern you?” Blitzer asked.

Colins shot back with a semantic argument, suggesting the question isn’t limited to whether Democrats wiretapped Trump Tower, but also if they engaged “surveillance” or “other nefarious activity” against then-candidate Trump. Collins said the issue should be investigated and we’ll “see where this goes.”

Blitzer referred to Trump’s Saturday tweetstorm, wherein he laid his baseless claim about Obama and called the former president a “bad” or “sick” guy.

“Do you believe that President Obama did it, that he’s a ‘bad’ or ‘sick’ guy?” the CNN host asked. “Do you agree with President Trump?”

Collins said “if it turns out” that Obama tapped Trump’s wires, “of course” he agrees with president’s characterization.

“I don’t have the facts, so I really can’t have an informed opinion,” Collins admitted, suggesting the best course of action is an investigation into the president’s claim.

“With all due respect Congressman, you don’t need a Congressional investigation,” Blitzer pushed back. “He's the President of the United States. If he has the evidence—within a nanosecond—he can release that evidence, make it public and show that he’s right. He refuses to do so which suggests he doesn’t really have the evidence.”

Collins danced around the Blitzer’s question, insisting it “depends what you mean by evidence” and “it may or may not be true” there was wiretapping.

“The president still refuses to provide any backup to those assertions and that’s causing alarm,” Blitzer said. “You understand that?”

Collins said he “certainly” does understand that but insisted he’s busy “working away” at healthcare reform.