How Facebook – the Wal-Mart of the internet – dismantled online subcultures 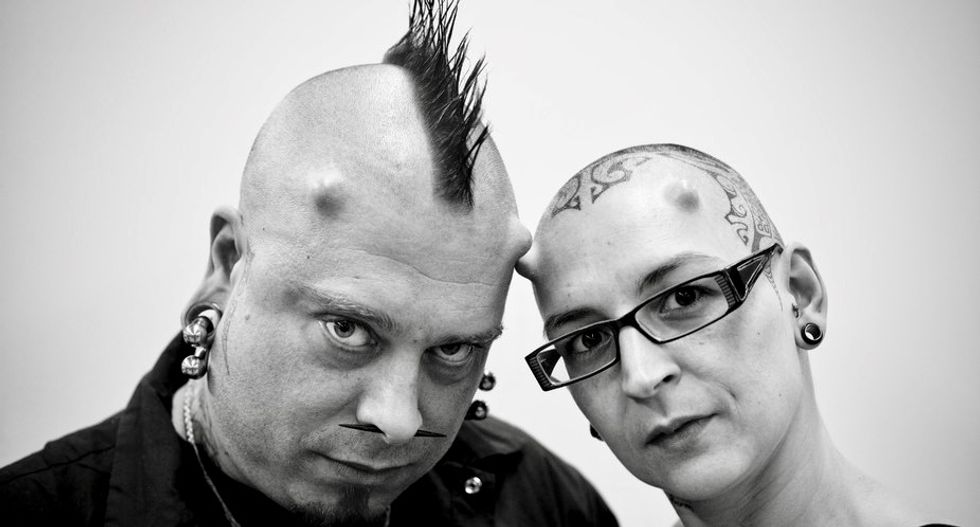 Before the internet, people interested in body modification – not just tattoo and piercing enthusiasts, but those drawn to more unusual practices like ear pointing, tongue splitting, suspension, scarification and the voluntary amputation of limbs and organs – had a difficult time meeting others who shared their interests.

The internet, of course, changed everything: You can chat and connect with anyone from your computer. And in 1994 – more than a decade before Facebook launched – body modification enthusiasts started their own social media platform: the Body Modification E-zine, or BME.

First operating as a bulletin board service (an early form of online message boards), BME eventually added features and functions that were forerunners before now-familiar online tools: blogging, wikis, online dating and podcasts.

But as sites like Facebook and Myspace emerged, BME found itself competing for attention with these new “global communities.” The story of the website shows how online communities can form and fall apart – and how Facebook’s monolithic presence makes enduring internet communities for people on the margins of society that much more precarious.

A commitment to authenticity

BME, along with the longstanding punk scene in New Brunswick, New Jersey and Brooklyn’s booming drag culture, are the three communities I studied in my forthcoming book “Digital Countercultures and the Struggle for Community.”

All three constitute what I call “countercultural communities” – groups that define themselves as being, in some way, opposed to the mainstream. As someone who studies digital culture, I’ve been able to see how outsiders can help us understand the biases that are built into everyday tools and devices, which are (usually) designed by straight, white men.

So what can we learn from a site like BME?

First, it’s important to note some key factors shaping how BME managed membership and participation. In contrast to sites that require people to use their “authentic” names to create a profile, BME allowed users to pick a pseudonym. The only requirement was an authentic interest in body modification. As a condition of membership, users had to submit photos or firsthand accounts of their modifications. These images and accounts were then vetted by BME members.

While tattoos and piercings might seem fairly common today, this was less true when BME was getting its start in the mid-1990s. And it’s still common for people who have undergone some of the more extreme body modification procedures, like tongue splitting and subdermal implants, to be ostracized.

BME’s rules for participation were meant to protect those who felt stigmatized. It also required members to take their role in the community seriously. Accounts could be suspended if users didn’t post regularly, meaning that people couldn’t simply sign up and lurk.

After Myspace and Facebook launched, BME struggled to retain members who were attracted to the larger audiences and more sophisticated features of the newer, better-funded sites.

In 2011, BME planned an overhaul: For the first time, they’d be utilizing designers from outside the modified community. After a series of delays and budget issues, the new version of the site launched. But there were bugs, and some users didn’t like the new aesthetic, which seemed to mirror contemporary mainstream websites.

Meanwhile, content that was mundane on BME, like tongue-splitting and ear-pointing, could be extremely provocative on mainstream sites. BME users that gravitated to these new social media networks could rack up thousands, rather than dozens, of views. And as opposed to the outdated, sometimes buggy software on BME, platforms like Facebook offered slicker design and more sophisticated features, like photo tagging and geo-tagging.

Over time, these challenges to the BME community became increasingly problematic. Members deleted accounts or stopped posting. By 2015, the main community forum – which used to have hundreds of posts a day – went without a single comment for over six months.

Having predicted many of the web’s functions and features, BME failed to anticipate its own demise.

The Wal-Mart of the internet?

How does the story of BME help us understand our relationship to technology?

When I asked BME’s owner Rachel Larratt about mainstream social media sites, she described them as generic and bland.

As a small business owner, Larratt recognizes that Facebook can help businesses like hers thrive. She just disagrees with Facebook’s contention that it’s one big “global community.”

“It’s all marketing,” she told me. “They are trying to foster that idea [of being a community]. It’s just staged, really, like a big box store trying to pretend like they are a local small business owner.”

In building a massive user base, the major social media sites resort to the lowest common denominator for terms like “community” and “user guidelines.” Facebook’s user guidelines apply to all of its users, even though its user base covers an incredibly diverse group of people, perspectives and values.

These policies can be tweaked and updated with minimal notice to users, which is also true of its design. Users have limited ability to communicate with Facebook’s administrators when there’s a problem, as we’ve seen when drag queens demanded changes to the “real name” policy, when nursing mothers rejected censorship of breastfeeding photos and when LGBT activists insisted that photos of same-gender couples kissing shouldn’t be blocked for being “obscene.” In all of these cases, Facebook attempted to enforce a blanket set of policies on groups that have a very different set of ethics and values.

I’ve found that the people who lose from this approach are those on the margins, whose identities and experiences are least likely to be anticipated by designers without significant experiences of marginalization.

Online life can be thought of as a place, albeit one that’s more conceptual than physical.

Yet in Facebook – with its massive user base – Larratt sees a kind of placelessness, much as the generic predictability of Wal-Mart contrasts with the authentic idiosyncrasies of a locally owned grocery store. The blandness of Facebook’s interface and the lack of options to customize or personalize its design contribute to this feeling.

Today, many think the internet is best accessed through a mobile device, which is sometimes labeled as a “mobile first” approach to design. Mobile first assumes that people will access the internet from a smartphone rather than a laptop, a design ethic that emphasizes apps and instant, seamless access, in contrast to a model of stationary and sustained attention. In other words, it’s designing for someone who wants to check the news on a lunch break or scan through reddit threads on the commute home from work.

For those who value feeling as if going online is a physical meeting point, easy and fleeting connectivity can be perceived as a bad thing, trading convenience for commitment. BME’s community was built up through sustained and regular participation. It’s the difference between grabbing a Dunkin Donuts coffee on the way to work and being a regular at a neighborhood bar. Becoming part of a community involves hanging out, messing around and committing to local rules for participation.

To be clear, I’m not making an anti-progress push against mobile devices. And I also don’t want to suggest that countercultural communities are best served by outdated technologies. But it’s worth considering whether mobility is always a good thing – and what assumptions go into the push for uninterrupted access.

Technology, and more specifically digital technology, often takes the blame for fears of social isolation. Hype about video game and internet addiction, along with stereotypes linking an interest in technology to poor social skills, makes the internet an easy scapegoat.

Yet researchers have found that internet access and social media use are linked to more diverse social networks. My research shows that the internet can be a powerful tool of connection and community support, especially for people who have nonmainstream interests or identities.

BME was meant to provide common grounds for people with uncommon interests, and for many years it did just that, becoming an online meeting spot as well as the authoritative source for body modification information. But BME’s model lost out to mainstream platforms that prioritized bigger online audiences and more sophisticated design over niche interests and user-driven guidelines for membership and participation.

So as we continue to design platforms for an ever-growing population of users, it’s important to consider who’s going to be on the other end of the keyboard. Otherwise only a certain kind of community will flourish, while others will struggle to survive.