'I never said I would provide answers': Sean Spicer snaps after White House is busted for leaking to Nunes 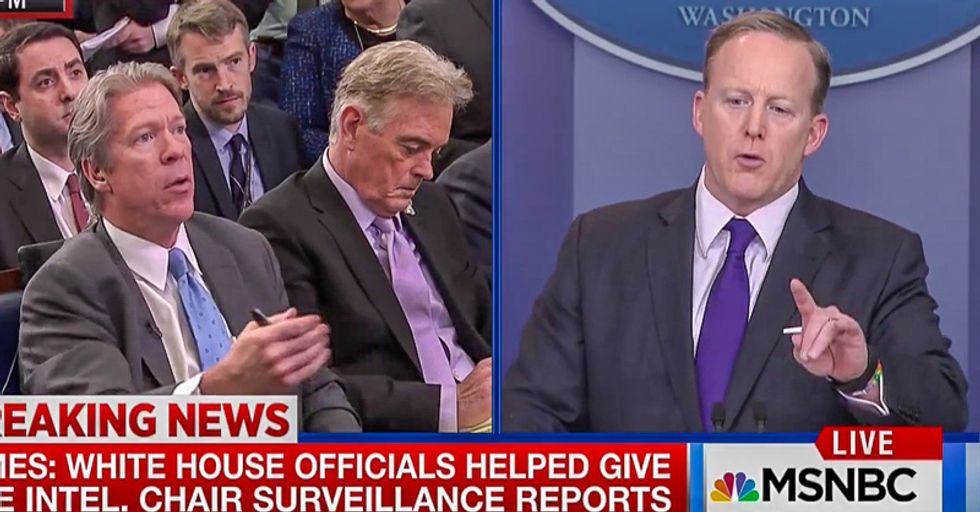 The press secretary was asked during Thursday's briefing about a New York Times report which said that White House Counsel’s Office lawyer Michael Ellis and National Security Council Senior Director for Intelligence Ezra Cohen-Watnick were involved telling Nunes about information that backed up President Donald Trump's claim that he was surveilled during the Obama administration.

National Journal correspondent Major Garrett reminded Spicer that he had said that the idea that White House staffers provided information to Nunes did not "pass the smell test."

"Your obsession with who talked to whom and when is not the answer," Spicer charged. "It should be the substance. In the same way that when you guys print a story with 18 anonymous sources, your obsession is the substance. Now, you continue to look at it from a backwards prism, which is what happened, who drove in what gate, who did they meet with, what were they wearing that day?"

"We are not going to engage actively in that kind of leaking that has been a problem," he added. "There are serious questions out there about what happened [with surveillance during the 2016 election] and why and who did it?"

Garrett noted that Spicer had promised to look into who signed Nunes into the White House, where he claimed to have reviewed information about incidental surveillance of Trump campaign officials.

"Please don't put words in my mouth," Spicer shot back. "I never said I would provide you answers. I said we would look into it."