'It’s simply not true': Robert Reich smacks down GOP talking point that Obamacare is 'in a death spiral' 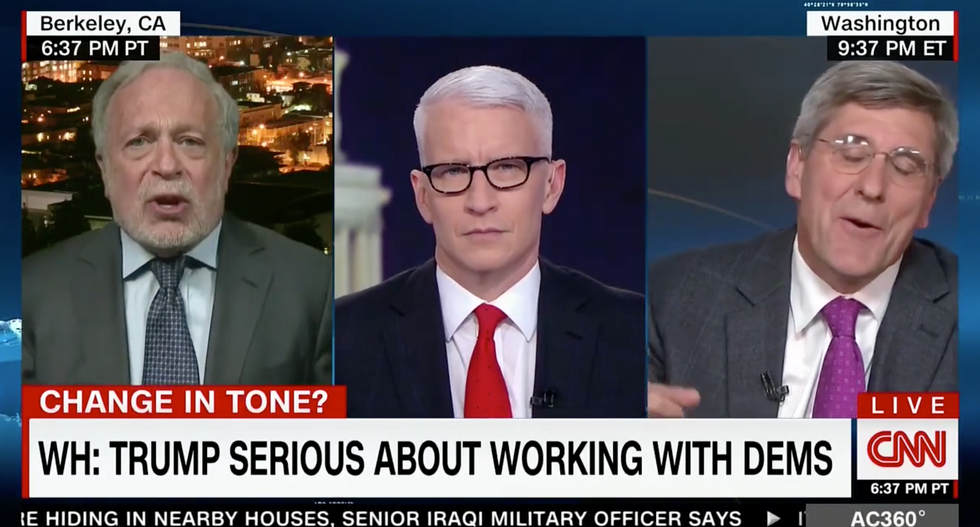 After a feeble attempt by the president and congressional Republicans to follow through on a central campaign promise the party’s been peddling for close to a decade, the GOP on Friday failed to pass a bill to repeal and replace Obamacare. Discussing this incredible defeat on CNN’s “AC 360,” Moore tried to argue Republicans will “lose the House and the Senate” if they fail to replace Obamacare by the 2018 election.

“I think that’s absolutely ridiculous,” Reich replied. "That’s absolutely absurd. In fact, one of the problems that the Republicans ran into is the knowledge Republicans had … that next year alone, 14 million people would have lost their health insurance … if there was a repeal.”

“Republicans are not stupid,” Reich continued. “They know their constituents want the Affordable Care Act, they want what they already have, they don’t want to see it gone.”

Noting the hard-right conservative Freedom Caucus was uninterested in a replacement plan for the Affordable Care Act, Reich told Moore, “straight repeal would be a huge burden on Americans. Even more than 14 million would lose.” Reich called the Freedom Caucus’ goal “cruel and unusual.”

“Why in the world would any Republicans want to do that if they expect that they’re going to be reelected?” Reich asked. “It hurts people!”

Moore repeated the conservative talking point that Obamacare is “in a death spiral,” prompting Reich to drop a truth bomb on the former Trump adviser.

“It’s simply not true,” Reich said. “The Congressional Budget Office said there was no death spiral at all.” Reich argued Democrats “would be wise” to strengthen the Affordable Care Act and work with Republicans to make “minor fixes” to the current plan.

“Eventually we’re going to have a single-payer system, we can’t avoid it,” Reich later added.